Daniel Hahn had trouble getting his tongue round the above words, but as he said, it might have been worth the wait. It was.

The witch travelled yesterday. Remind me not to do that again. Ever. There was a major IT hitch on almost all fronts on arrival in London, but if you are reading this, then it ‘solved itself.’ You know, sort of putting petrol in your mobile phone kind of thing.

OK, so you’re at Waterstones piccalilli (I thought Anne Rooney was being funny, but it seems she just suffered predictive texting) and you’re there to hear Penelope Lively and Philip Pullman tell Daniel Hahn anything he asks. Who – apart from your good self – will be in the audience? Anne Rooney was there, and so was Celia Rees, without whom I wouldn’t have known this was even on. Thank you! And then there was the lady in the row in front of me (i.e. second from the back), Judith Kerr. That’s what I call class. 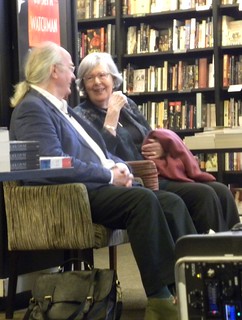 (And before I forget, please let me mention how friendly and helpful the organisers were. They were friendly and helpful. I was trying to do really weird things with tickets and then it turned out to be dead easy, and they were pleased that my friend was Anne Rooney.)

I very nearly sat down on the chairs where Penelope and Philip went to sit before going ‘on stage’ so it was lucky I didn’t. I’ve not seen Philip for almost three years. I’d hazard a guess that he hasn’t seen his barber since then either. Very cool.

In his introduction Daniel Hahn reflected that when he grows up he will become Penelope Lively. I think this was based on the fact that all three of them either are or have been something great in the Society of Authors. And he listed their books, making a wild guess that if we wanted to buy any, then Waterstones probably had them somewhere in their shop. 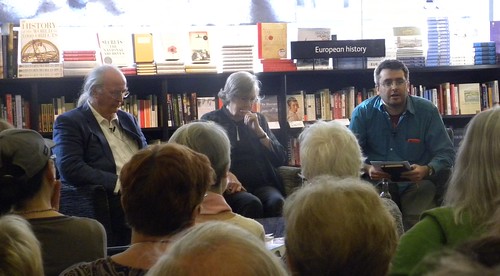 Penelope seems to be proof that home education works, since that’s what she got as a child in Egypt. She read a lot. By WWII, Arthur Ransome’s books had arrived in Cairo, and all those lakes and all that rain seemed like fantasy. Later on she was sent to boarding school, where punishment for bad behaviour was an hour’s reading in the library. Both she and Philip are of the opinion that the kind of reading you do as a child is something you’ll never get back.

Philip learned how big the world is on his many trips round the globe by boat. He read the Just So stories, Noddy and comics (they were allowed in Australia, apparently), and he read Moomin in Battersea library. He needs the rythm of words, and when he’s writing he can’t tolerate music. Penelope agreed about rythm, and often reads her writing out loud to see if it works. 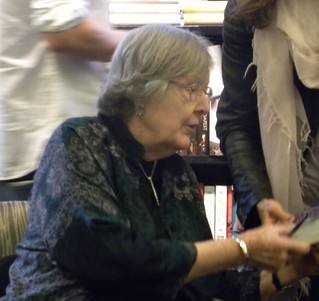 Her writing career came from her obsessive reading. She writes less these days, but always writes something. Philip compared the early days when he worked as a teacher all day, and still was able to write at night. Now he manages his three pages per day, but that’s it. (And no, no one asked about the Book of Dust.)

While Penelope generally knows what is going to happen in a book, Philip writes ‘in the dark’ and is quite opposed to planning. Daniel wanted to know if they are optimists, despite last week’s [political] results, and they are. Both agreed that stories are a human necessity and always will be. Both prefer paper books, and Philip pointed out it’s so difficult to dry your Kindle if you drop it in the bath, with thousands of books on it.

Philip reckons that the good thing about the very large publishing companies we have today, is that their sheer size means there is room for smaller publishers in the holes between them. And that’s good. 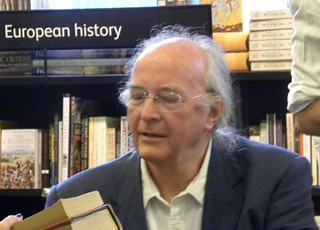 Book festivals and book groups are new concepts for authors, and Philip likened author events to a roadshow, but without the possibility of filling large arenas or selling any merchandising. Although Daniel tried to suggest we could buy some HDM hats afterwards…

A book that really affected them when they were young, was a version of Robin Hood where Robin dies, for Philip, and Nicholas Nickleby for Penelope. The reason Philip introduced daemons in HDM was to make it easier to write; it was his version of Raymond Chandler’s idea of introducing a man with a gun whenever necessary.

Diversity is obviously important; it’s what you seek in books. Both to find yourself in the book, as well as learning about others. Neither of them writes a last page or chapter to use as a goal for their writing. Penelope might have an important scene, whereas Philip writes in the order you read, and he knows when he gets to the end.

He is superstitious and prefers to write at his own table, with all his ‘lucky’ things around him, although he has written in many different places too. Except in a concert hall. Penelope can write anywhere and often has done, including in airports. She quite likes to write in the garden. 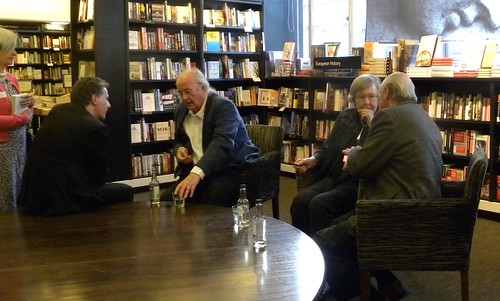 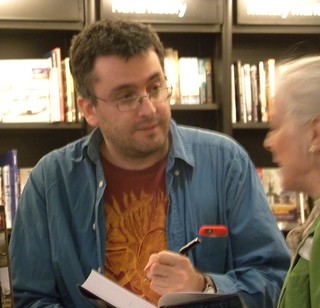 And on that note Daniel brought things to a close, which meant that the audience got wine and an opportunity to chat with the two Ps and to have books signed. And Daniel also had his book there (which I should have thought of!) to be bought and signed.

Before returning to my temporary home to face my IT woes, I had a nice chat with Celia Rees, thanking her for her part in this evening, and saying how this is the way we like our events.

11 responses to “‘Extraordinary tellers of stories’”