Stars Shall Be Bright 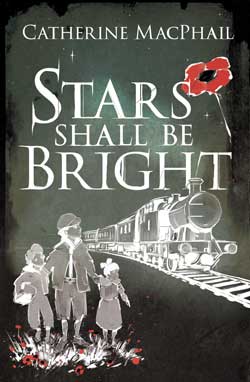 In memory of the lost children of Maryhill, who died in the Quintinshill Rail Disaster exactly one hundred years ago today. We don’t know their names or what they were doing on a train full of soldiers going off to war.

Catherine MacPhail has a theory, which she shares with us in this Barrington Stoke story, Stars Shall Be Bright. She reckons they were siblings James, Belle and William, who set off to find their dad who was a soldier.

Their mum has just died and to avoid being taken into a home, James decides to take his brother and sister on a trek to find their dad, lying in order to get away from a ‘well meaning’ neighbour.

They hide on a stationary train, which soon fills up with over 500 soldiers, travelling from Larbert to Liverpool, on their way to Gallipoli. Near Gretna Green the train was involved in a three train crash, with 225 soldiers dead, 246 injured, and 65 walking wounded.

And then there were the bodies of three children.