When you’re on fire

There is a difference between what people say they will grab as they run out of their house, if it’s on fire, and what they will really do.

I can understand the feeling that family photos are important, but they are an impractical thing to grab (unless you have prepared a small folder of the most valuable pictures you have, which just happens to sit by the likely fire exit), and these days you could have everything saved in cyberspace.

The other week Anthony McGowan asked me which book I’d take if my house was on fire. I am guessing he wanted to know which of my many volumes I value the most. I turned the question round a bit, by saying that I’d been in this situation, and my experience tells me I couldn’t care less about any books.

When it became clear that night thirteen years ago that it might be prudent to leave, I simply took my two Offspring and sought ‘asylum’ in the house next door. The Resident IT Consultant was doing stuff to the stoptap in the basement, but was eventually prevailed upon to grab his senses and come with us.

In the end this was not too bad a fire, as it was discovered in time. But I learned that belongings of any kind don’t matter. Only people. Pets if you have them.

But I tried to answer Anthony’s question, after I’d disconcerted him with my experience of this. And it’s not necessarily the story as such, since most books can be read after a fire by buying or borrowing a copy of it again. So I thought about signed books. Were any of them more valuable to me? No. Signatures are fun, but unless you can make a fortune selling them, there is more value in remembering how and when the signing happened, than the actual scribble in the book.

Doodles, however, are different. I mean, works of art. Some people spend a lot of time and effort on embellishing that page in their book for you. And when I’d got that far the answer was relatively easy. I have six lovely, velvety novels by Debi Gliori, with the most glorious ‘doodles’ on the title pages. 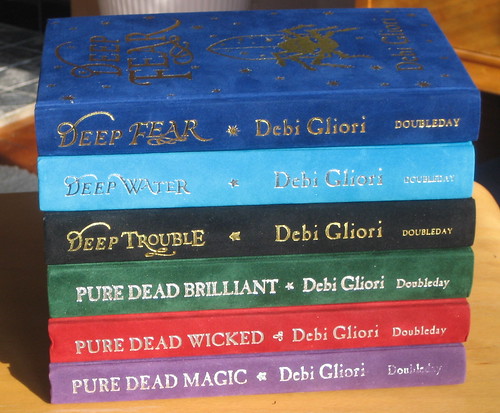 6 responses to “When you’re on fire”