An Island of Our Own

This is the best book Sally Nicholls has written – so far – and she has written some really good ones. 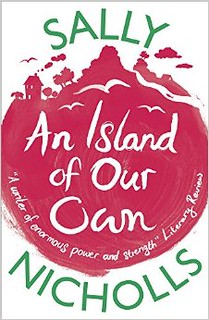 An Island of Our Own is that perfect thing; a tremendously good children’s book. Written as though by 13-year-old Holly, who is an orphan, living with her 19-year-old brother Jonathan who is official carer of her and their brother Davy who is seven, Holly wants new school shoes and Davy wants a bike. And for his pet rabbit to get well.

This costs money they don’t have, especially as they live in London, and when their rich great aunt Irene dies, they embark on an only slightly crazy quest for their inheritance. As it says on the cover, this really is a book about home-made spaceships, lock-pickers, an exploding dishwasher, and Orkney (my second Orkney book in a short time). But most of all it’s about love, and resilience.

Jonathan makes a far better ‘parent’ than many ‘real’ fictional parents, and it’s heartbreaking to think of this boy who was all set to go to university and had to give it up, and who cries in secret when he can’t find the money they need to pay for Sebastian’s (that’s the rabbit) care or the effects of the dishwasher incident.

Holly is a wonderful girl, ever the optimist and very clever at working out how to solve things. She reads Sherlock Holmes, and Agatha Christie, whose novels might be for adults, but ‘even Agatha Christie never kills twenty-two kids in one book, like they do in The Hunger Games.’

There is something so very light about Sally’s writing. Her topics are serious, but she turns everything into sheer delight, and you smile and you cry. And you want to read the book again.