When I saw Chris Riddell’s instagram doodle of Philip Ardagh yesterday morning, I sort of wondered if it ‘was him.’ Him, who would take over from Malorie Blackman as Children’s Laureate. Chris, I mean. Not Philip. 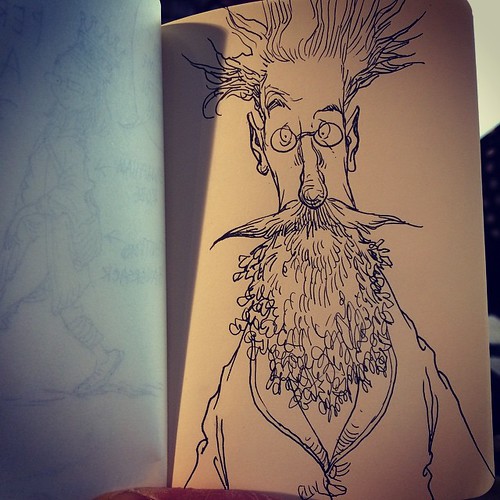 Seems my instincts were right. I’d not spent a lot of time thinking about who might be next, because for some reason nobody very obvious jumped out at me when I tried. But now it is very obvious indeed. This laureate business couldn’t have happened to a nicer, or more suitable, man.

Congratulations, Chris! Let’s hope laureating is not a Fete Worse Than Death.

This makes me wish more than ever that I could be in two places at once. Chris invited me to some do, down in Sussex in early July, but I had already promised Manchester I’d spend the day there. Where is that timeturner when I need it?

Last month I was asked to write something (which you will find out about at some point), for which I thought an illustration by Chris would be just the thing. First I had to own up to having ‘borrowed’ it already, and then I needed to ask his permission to do so again. And a few other questions.

His reply was the quote above, and I rather wished I’d asked for more when I received it. But I concluded I could simply choose to use it as a blanket OK for anything else I might think of…