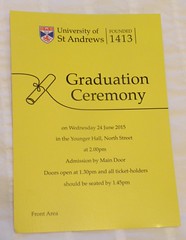 Four years ago I wished for a pause in this graduation business, and I’d be an ungrateful parent to grumble now. Anyway, the second Offspring graduated yesterday and we went along to enjoy some typical British June weather and a bit of gown and town.

Four years ago I had a photographer taking photos. This time I had myself, and the results are not quite in the same ballpark. But at least I can show you a whirlwind being applauded by none other than Dr Vinton G Cerf, Vice President of Google. And she is my whirlwind. So there. 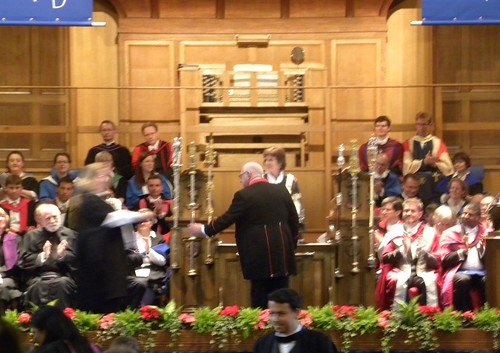 Some other subject will get Neil Gaiman this week, as their Honorary Doctor of something or other. But in fairness, on any average day in the life of the Bookwitch, I Google much more than I Gaiman, so I think it was appropriate that St Andrews made one more Honorary Doctor of Dr Cerf. Besides, thinking about his accomplishments, they are actually pretty admirable. He had been a bit disconcerted when told about the capping and hooding that would happen, but discovered it was all quite innocent. 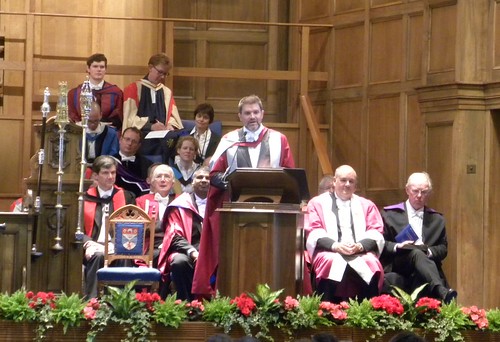 And both the Professors of Computer Science who spoke did so briefly and interestingly, for which I thank them. The Principal and Vice-Chancellor (they are one and the same) Professor Louise Richardson did all of the capping, processing in the region of 200-300 new Bachelors, Masters and Doctors. The Dean of Science, Professor Alan Dearle, heroically spoke nearly every name correctly, and managed most of the titles for the theses as well (and some of them were outlandishly long and complicated).

The St Salvator’s Chapel Choir sang rather nicely, both before and after the ceremony. 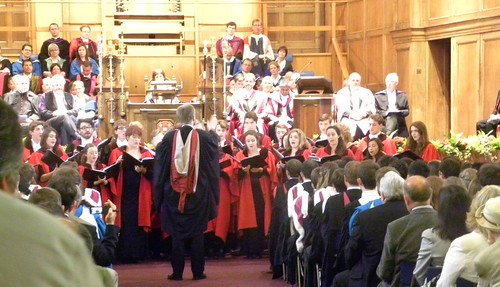 Once we were done, we trooped into the Quad for some mingling and photo opportunities and lots of hugging. When it was time to go into the Garden Party the Resident IT Consultant gallantly sacrificed himself and let the ladies use the three allotted tickets. So he never saw the dainty Buckingham Palace style cakes. (Just as well, really.)

Met Birdie’s mother, who sported a very trendy Berså brooch, but I was too polite to mention I have the full dinner set… And as I said, we sat out in the cold, enjoying our little cakes, wondering why our warm clothes were in the car, but blessing the fact that it didn’t rain as forecast.

It was also good to finally meet the ‘teachers’ and more of Daughter’s classmates, since at this stage it is the kind of thing you don’t do much. Very good of the department to offer a light lunch beforehand. I’d be more than happy to return for more tropical cake another year.

A special witchy thanks to Dr Bruce Sinclair. Not so much for the cake, as for [only] doing his job so well and really making a difference.

This entry was posted in Blogs, Education, Travel and tagged Neil Gaiman. Bookmark the permalink.