My Name’s not Friday

Samuel has a strong belief in God, and he loves his younger brother Joshua. I was actually left wondering why, in both cases. What did God ever do for Samuel, or for Joshua, come to that? Also, Joshua almost goes out of his way to be a bad little boy. On the other hand, we know that circumstances will make a child or person something that deep down they are not. 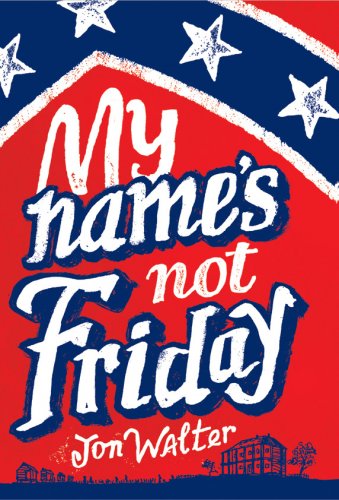 And Samuel is not called Friday.

He has been brought up in an orphanage as a free black boy, and given an education, of sorts. But then circumstances conspire to have him sold as a slave, and he has to learn to live a whole new kind of life, as the 12-year-old property of a young white boy in the American south.

At times I wondered how Jon Walter could know what it was like back then, in a different country, but this is what writers do. They make stuff up, and I don’t suppose that a modern American author would know any more about what it was like to be a slave during the Civil War.

We learn about three different periods of Samuel’s life; the orphanage with all that is good and bad, his life as Friday, who isn’t even allowed to show he can read and write, and what came after the Union soldiers arrived.

It’s very interesting, and at times I was afraid it would turn out to be like Roots, where you never once could know what happened in the first place after someone had moved on, because being real, there was no all-knowing author to let you know about the people and places left behind. Which I found very frustrating. Here we do get to see more than just the time and place in history where Samuel is, and that’s good.

The characters are allowed to change and grow, which makes the story deeper. And the whole book is one big history lesson about slavery, like how you are powerless when your owner sells a member of your family to someone else.

To be truthful, Samuel took a while to win me over, but in the end he did.