Women Heroes of World War I 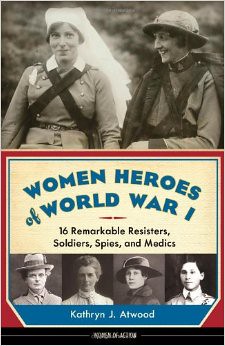 Here is another book that has taught me things I didn’t know. I’m far too used to looking at WWI either from my neutral standpoint, or from Britain, and Kathryn J Atwood – as an American – looks at it both from her ‘over there’ point of view, but mostly from inside Europe, and mostly as seen by the women who lived there in 1914.

Those women didn’t necessarily want to stand there and do nothing. Many felt the need to do their bit for the war or for their country, or they simply hoped for some adventure in their lives. For some it was relatively easy to get involved, while for others it took a lot of deceit or at least time to get the men to see sense and allow them to join in.

This book tells the brief stories of 16 women who did something, either as resisters and spies, soldiers, medics or journalists. Some of them were poor and uneducated, while others were part of the nobility. Some were of more mature age, and some were only teenagers. Some went looking for war duties, while others had it thrust upon them.

But they all did good and important work, and some of them died doing it. In fact, so dangerous did it seem to me that I was almost surprised any of them lived to a good old age.

This is very fascinating, and in a way it’s infuriating that each woman only gets around ten pages to tell her story. On the other hand, with the bibliography for each entry, you could continue reading on your own, although as Kathryn says, not all books are available in English, which is a shame.

Women Heroes of World War I is an inspiration to girls everywhere. Not necessarily to join wars, but to stand up and do something.

2 responses to “Women Heroes of World War I”