Sara Paretsky allowed herself to be pinned down by a mix of my usual profile questions and some more bespoke Sara-questions. When it comes to certain things in life, if in doubt, I tend to ask myself what Sara would think about it. 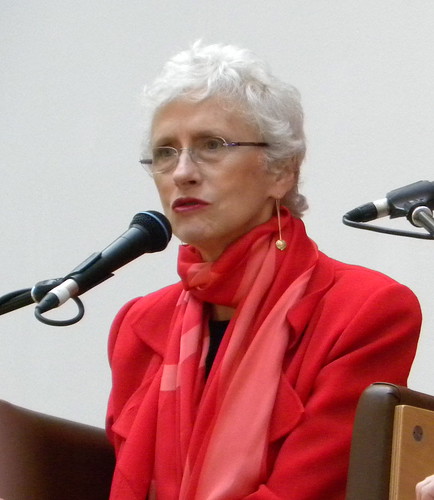 The first time we spoke was seven years ago, and you were – I think – cautiously optimistic about Obama as your next President. ‘Things will be better, but it will not be fabulous.’ How do you feel now, looking ahead to 2016?

I think I was right about Obama – things are better, but not fabulous. Looking ahead to 2016, though, I‘m terrified.

You also talked about women crime writers, getting fewer hardback books published, leading to fewer reviews, and I assume, smaller sales and less income. Is it still as bad?

I think almost everyone is having a rough ride in today’s publishing world and we’re all trying to sort out how we find readers and what medium we want to publish in. As President of Mystery Writers of America, I’m learning that the writers most seriously affected by contracts in the industry are writers of colour. I’ve written about this in detail in an essay for the US trade publication Book List and the essay is on my website.

Do you ever think about retiring from writing about V I? (Please tell me you’re not. Except I can understand if you do.) Does it ever feel as if you’ve got a tiger by the tail and can’t let go?

I can’t imagine retiring from V I although I know there will be other books in other voices I will want to write. It’s not having the tiger by the tail – V I is an intimate part of my creative mind.

Is there anything you would never write about?

I shall never give graphic descriptions of serial killers’ work, or rape or dismemberment.

What’s the most unexpected thing that has happened to you through your writing?

I haven’t expected anything that is happening to me! It is often a slow, but amazing journey.

Do you have any unexpected skills?

I make the best cappuccinos on the south side of Chicago – and I am a very still sleeper as I don’t toss and turn at night!

Who is your most favourite Swede?

How do you arrange your books at home? In a Billy? By colour, or alphabetically?

I stack books around my bed – like a wall – as I read them. Everyone now and then I’ll shelve them. I read three or four at a time and if I wake up in the night, I just reach out for one.

Please tell us about your new dog.

Chiara has two speeds – zero and 120 mph. In the home she mostly sleeps and outside she is in motion all the time … and she is a love bug.

Do you still love the Chicago Cubs?

OK, moving on to the important stuff; what do you reckon really happened at the end of this season of NCIS? What would you prefer to have happened?

I was horrified when Gibbs was shot and that should never have happened. However, too many of the dead major players have been either female, black or gay… so from a PC standpoint it was good to have a straight, white, male take a few knocks!

And could you write an episode of NCIS?

Curiously, although I love the show, I never imagine myself into it, so I think the answer must be no …

I had to go and watch that ending again. I think we can resurrect Gibbs, even with a different scriptwriter than Sara Paretsky. And from one still sleeper to another, I wasn’t in the least surprised by Sara’s choice of Swede. Respect.

3 responses to “Q&A with Sara Paretsky”