They know who the sausage thief is. Frank Furter. It’s just a case of catching him, and preferably before the village sausage festival in Little Barking has to be cancelled. 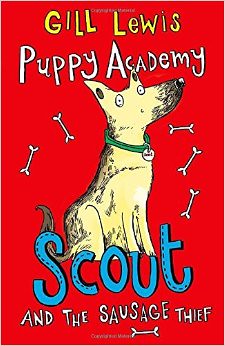 Here, with Puppy Academy, Gill Lewis is back with clever doggy students who want nothing better than to be good working dogs. Scout, the German shepherd puppy, wants to be a police dog like her mum and dad.

As you will have worked out, this is not a real school where dogs are trained to be police dogs. This is more a world of dogs who talk, go to school and have jobs, while being pretty much the same as you and me. (Within reason.)

This is a nice little adventure, where poor Scout is working hard at being good, but having setbacks and needing to work even harder at putting things right. Catching Frank Furter is one thing, but who stole the Crunchie Munchies?

One response to “Puppy Academy – Scout and the Sausage Thief”