The place I had to be on Saturday afternoon was a nearby author hotel, where I was going to interview Michael Grant. Again. (He interviews so well! How can a witch not go for him over and over again?)

Michael had just arrived in Edinburgh, but had skipped immediate jetlag by doing research in England first. Some nautical research, and a wide-eyed new discovery in the shape of the London Oxford Street branch of the shop that is never knowingly undersold. Michael loved it, and had had no idea such a place could exist.

He looked better than ever, tanned and thin, and pretty unstoppable. This time I made sure he had coffee that didn’t politely go cold, although it might have been dreadful coffee for all I know. I had the tea.

I’d been reading his new book, out later this week, the second and last in his Messenger of Fear series. I wanted to ask why he’d gone in such a new direction, and what will happen next, and then what comes after that. Lots of books, is the answer. We got to admire his daughter’s new hair, which cost a fortune, and my photographer learned some financial tips from Michael’s son (who wasn’t there, and nor was his sister).

We got longer than planned, as Michael was hungry and wanted a sandwich as well. He can eat and talk at the same time.

Afterwards we walked over to Charlotte Square for his event, and I can tell you that was one long queue he had, waiting patiently. It’s always good when there are lots of teenagers at teenage events.

It was fortunate that Michael had already shown us the disgusting images on his laptop, so they didn’t come as a complete surprise when he started off with them. (His wife doesn’t like them, either.) And he set us a problem to solve, making the tent into a sealed brick building, with monsters coming out of the floor, wanting to eat three humans. He wanted to know what our monsters looked like. (Blue, in my case. A bit blobby.)

This time Michael had decided to preempt the perennial question about where he gets his ideas from, not wanting to get annoyed, or claim that they come from Tesco, next to the yoghurt. That’s partly the reason he’d found himself this software that produces such creepy and disturbing pictures.

At one point I thought Michael claimed not to have been on a riding course (and I could just visualise him on this horse), when I worked out he’d not been on a writing course.

One of his book ideas he described to his editor as The Seventh Seal, but with fewer Swedes and more teenagers. (You can never have too many Swedes.) As for sex, that is more fun to do, than to write about. Although we learned that he has a past writing Sweet Valley Twins books, which is actually a bit disturbing.

Michael has completely ruined his editor, who has gone from someone who recoiled from his suggestions, to actively embracing them. With Messenger of Fear he put in everything he could from his own fears, which have mostly to do with his children, and if he got rid of them, his wife. (He has tried.) Then it’s fire, and small closed in places. 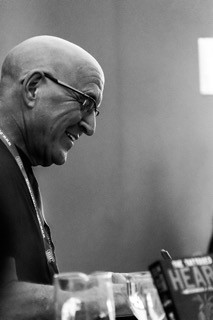 He’d never put himself in the books, but when asked who in Gone is most like him, it’s Quinn, ‘the unreliable friend, the backstabbing little shit.’

And on that note we stampeded to the bookshop next door, where he signed books until he eventually got rid of his fans.

As for me, I can’t now unthink some of the ideas Michael has put into my head; from bricked up book festival tents, to being the one fed to the monsters.