What Five Children and It Did Next

My first event on Monday was learning more about Kate Saunders and her much praised book Five Children on the Western Front, which won last year’s Costa. I’ve not read it yet, nor do I know the Edith Nesbit original stories all that well. I read some, but it was a long time ago.

Kate wrote this sequel to Nesbit’s books for the anniversary of WWI last year. She had long ago worked out that those children were just the right age to be caught up in the war that Nesbit didn’t know about when she created their idyllic, magic, free childhood. 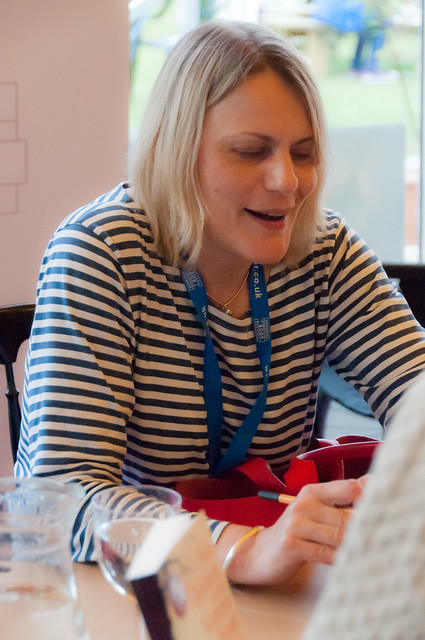 As a child Kate felt that E Nesbit spoke directly to her, and she reckons that the author ‘put all the seeds down’ and she simply wrote her book, based on what was already there. Kate’s own teenage son died a few years ago, so she feels the far too early loss of young people very strongly.

She had plans for whom to kill off, but at least one character was saved by book reviewer Amanda Craig, who forced her to rethink. And in Monday morning’s school event, it appears Kate managed to make chair Daniel Hahn cry, which just goes to show how books can affect people.

Writing your last letter home, for if you don’t survive the war, features in Kate’s book (this was the moment my first pen decided it had had enough). She said it’s ‘outrageous that young people are sent away to be killed’ and she found that using magic in her story meant that it wasn’t all about life on the home front, but she was able to let the younger children see what went on in the trenches, while they were trying to help the Psammead.

The one thing that doesn’t translate well to a new book like this is the way Nesbit treated servants. She was very un-pc, and Kate has made a point of being nice and kind to ‘her’ servants, in whatever accents you get.

The audience in the Writers Retreat were fairly young, but they had nevertheless read both Kate’s book and the Nesbit ones, and they came up with some really excellent questions. Kate told them she began writing at nine, and that in twenty years’ time it could very well be one of them who would be talking at the book festival.

On the subject of dramatisations of novels, she feels it’d be hard to get in there and beat War Horse. This former actress once had to pay her son to come to the theatre with her.

Kate had to work hard at not revealing who dies in her book, or the fates of any of the characters. The children kept asking, though. And with war you just can’t have anything but a sad ending. It can’t be avoided. The thing for Kate was that there should be kindness, and there’s a strong sense of right and wrong.

There will be no more sequels of other people’s books for a while now. She wanted her book to be true to the feeling of Edith Nesbit. She compared it to considering rewriting the New Testament, which is something you just wouldn’t do.

Generally Kate doesn’t know what the end will be until she gets there. It’s ‘better to make it up as you go along.’ She needs a good start and then she has to have a shape that she strives for. After that she might rip up chapters (computer fashion) to make her book better.

2 responses to “What Five Children and It Did Next”