The Girl Who Did Blog Tours

From Middle Grade to Murder: a children’s writer’s descent into depravity

As an avid reader of middle grade fiction at the time I wanted a complete career change, writing for children seemed the obvious thing to do. I understood children because I owned two and had once been one myself. I knew quite a few words. Great. More to the point, as my children were toddlers at the time, I decided that ideally, since I could paint as well, I should be creating picture books. Perfect! So, I knocked up a 32 page dummy of a story about a selfish, lazy hippo, called Billy the Messy Hippo. It was a didactic, overly long story, where Billy got his comeuppance for being a shitehawk to the other toys. 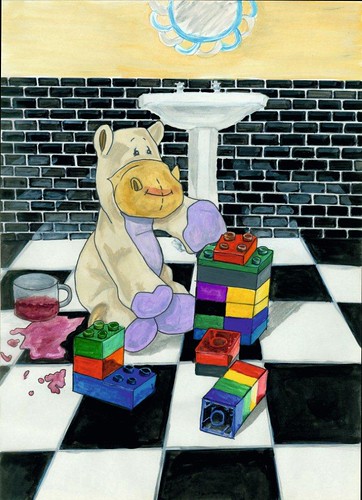 Really, I wanted to punch Billy on the nose for spilling his drinks and bullying teddy. Maybe a spell locked in the freezer would cool him down. Or maybe I could disembowel him and throw his plushie stuffing in the bin. OK. Perhaps this short format wasn’t working for me. And the illustrations took weeks and weeks to do – it just wasn’t practical. There were better illustrators out there, anyway. I laid my picture book aspirations to rest (no bludgeoning or shallow graves were required).

Next, I wrote a middle grade novel about a girl called Zeeba, who goes on the hunt for aliens, sighted above the hills in Huddersfield. She got roped into a high octane world of spies, subterfuge and gangsters. There were some menacing, corrupt policemen and a disembowelled cow.

There were more children’s novels – the first six books in the Time Hunters series for 7+, published by HarperCollins under the pseudonym Chris Blake. Lots of fighting and peril in them, of course. Plus a puzzle to be solved.

Everything I had written for children included a high concept mystery, a great deal of tension, thrills a-plenty and violence. But I felt my nasty narrative was stunted by the age-banding. Perhaps I needed to try something else…

So, having developed the sparing, highly visual style of a children’s writer, I started to pen a crime novel for grown-ups. The Girl Who Wouldn’t Die was the first novel in a gritty, gripping, often violent Euro-noir series, featuring a young criminologist called Georgina McKenzie. In writing these books (I’m currently working on book 3 – The Girl Who Walked in the Shadows), I feel like I’m home. Everything fits. My writing style is still very akin to that used by Young Adult authors – I use very little exposition. Each chapter contains a distinct, often visual scene. I try to keep my dialogue snappy and realistic. But importantly, I am now able to make people have sex, drink heavily, smoke drugs, commit criminal offences, be utterly unpleasant to one another and, yes, disembowel other people. I think I’ve found my literary calling. 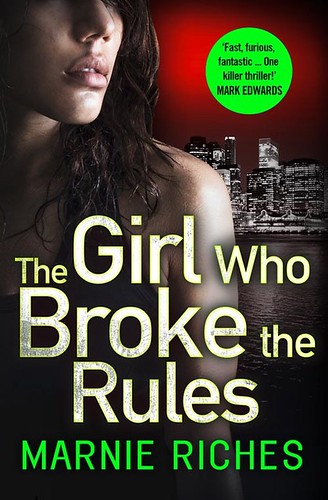 The Girl Who Broke the Rules is the second instalment in the series. In this book, I feel I’ve really got into my stride with my characters. It’s a story, seemingly about the brutal murders of sex workers, that flits between the red light district of Amsterdam and the strip-clubs of Soho. I wanted to explore themes of parent/child relationships, sexuality and the abuse of vulnerable migrants. I hope readers will see shades of Nesbø, Larsson and Thomas Harris in there, since these three are my biggest influences.

The question remains, however, as to whether I regret trading middle grade for murder? The answer is no. Because I will still continue to write children’s novels when my adult fiction deadlines allow. For, although a warped, adult imagination lurks behind my terribly boring, respectable middle-aged exterior, there is still a part of me that laughs at fart jokes and wants to tell utterly daft, touching stories about discovering the world through a child’s eyes; making sense of their relationships with adults and peers.

In fact, I predict I might well be working on a high concept children’s thriller before the year is out and maybe, just maybe, there won’t be a single disembowelling!