Yes, what’s the difference? That was one question at the event with Roy Gill and Paul Magrs yesterday. According to Paul sci-fi is something that could happen, given certain technical circumstances, while fantasy just couldn’t.

I have never seen the Imagination Lab so full before. They had to keep carry in more chairs for people to sit on. I’d been hoping to learn how on earth you should pronounce the name Magrs, and from what my elderly ears picked up, it sounded rather like the title of Paul’s book, Lost on Mars. So, Mars by Magrs. 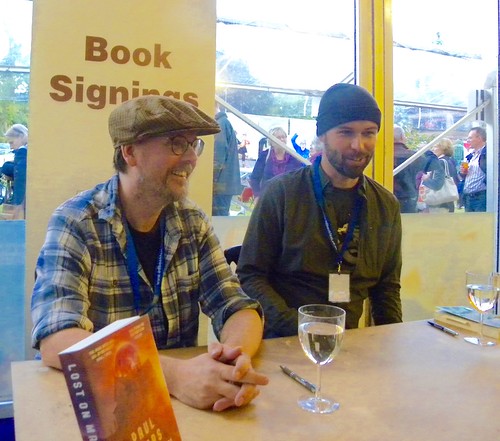 Paul was there to talk about his Space Opera, set on Mars (and no, it couldn’t be moved to Venus just because the publisher already had one Martian book on the go). He’d been inspired by Laura Ingalls Wilder’s Little House on the Prairie books, as well as by Ray Bradbury’s sci-fi.

Apparently many authors treat writing like going to school, although I’ve never heard this before. So Paul started writing Lost on Mars on September 1st and sat at his kitchen table with his newly sharpened pencils until before Christmas, occasionally standing up.

Roy conveniently dreamed the Daemon Parallel. He’s someone who puts his ideas in a notebook, and this sat there for several years until he got desperate. The dream gave him the weird grandma, and to make her truly odd he decided she was going to want to bring her son back from the dead.

As the chair for the evening said, the two books seem quite different, but actually have a lot in common, like the grandmas. She asked them if the main characters could have been a different age than Paul and Roy made them, but they felt not. There is something about that age where they are old enough to be able to do what they need to do, but also young enough that they don’t act like adults.

According to his old diaries, Paul has wanted to be a writer since he was ten. When his school was closed due to snow, he spent the mornings writing a novel, and the afternoons writing Doctor Who episodes.

Writing was a less obvious choice for Roy, who didn’t really get it until he was about thirty. His PhD supevisor pointed out his writing was so good ‘you can get away with very little content.’

Paul read chapter five, which is where the grandma in his story has to have her artificial leg seen to. It almost seemed creepier than when reading it in the book. Roy read the meeting between the teenagers and the weird lawyer from Werewolf Parallel, and I’m not even going to mention the odd chin. (I didn’t mention it!) His daemons are all very random, and the Jenners episode stems from him getting lost in this posh shop as a small boy.

When they were young(er) Paul read and liked Doctor Who. Roy liked Susan Cooper’s The Dark is Rising, and he’s a big fan of Diana Wynne Jones. Paul, on the other hand, was quite old when he discovered these books. And I didn’t totally grasp his tale of exchanging letters in verse with some dinner ladies…

But it’s all fine, and I made it out nice and early to have my copy of Lost on Mars signed. My Daemons had already been done.