Some more Saturday in Charlotte Square

The first thing I decided after travelling in to Edinburgh yesterday morning, was that rubbing shoulders with Francesca Simon had to go. It would have been lovely, but the party at the Edinburgh Bookshop I’d kindly been invited to meant returning home on a late train, full of rugby fans and festival goers. And I like my trains a bit emptier than that! 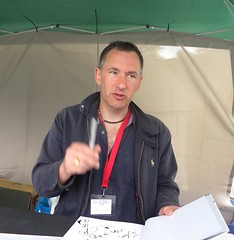 So it was with a heavy heart that I didn’t go and meet all those authors. (I’d like these festivals and things to be more spread out, and for me to be the only one out travelling on a weekend.)

And I actually bought a book. Chris Close who has been photographing visiting authors since 2009 (that’s when Bookwitch started bookfesting as well), has put some of them into a book and I simply needed to have this book, and Chris signed it (rather more politely than I suggested) for me as well. 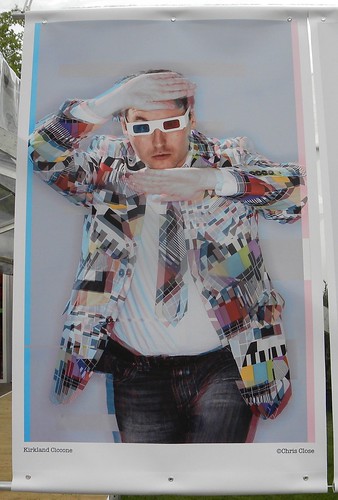 He also pointed me in the right direction to find his recent photo of Kirkland Ciccone. Kirkie wore his loveliest test card jacket and tie (disappointingly with a plain white shirt) the other day, and it’s not that Chris is a bad photographer, or that your eyesight has gone funny, but he gave Kirkland the 3D treatment. (Personally I suspect the aerial needs adjusting.)

Oliver Jeffers had an event on before I arrived, so I caught him signing in the bookshop afterwards instead. He’d been dressed as one of his characters earlier, but looked more his normal self by then. 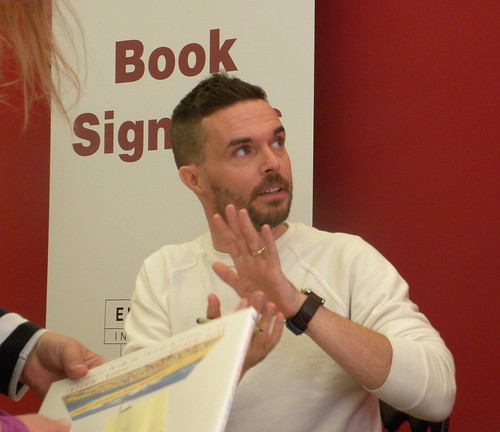 After my photo session with Eoin Colfer, we encountered a small child playing with the ducks. It struck me as unusual, but very sensible. The child’s father tried to claim he was from Fife, but that was the most American Fife accent I’ve ever heard. And I could only partly explain the purpose of the ducks to him.

At this point I spied a man arriving, elegantly dressed in a mac, which I suppose is suitable for a Scottish trip. He was none other than David Fickling, followed by Mrs Fickling. And I forgot to ask what I’d been thinking I needed to ask.

I hung around hoping to take pictures of Darren Shan (you can tell it was most of the Irish boys all in one day), but that didn’t come to anything. He did wear a rather fetching t-shirt as I saw him race past before his event.

So I finished by going to find Marcus Sedgwick in his bookshop signing instead. And that was nice too. 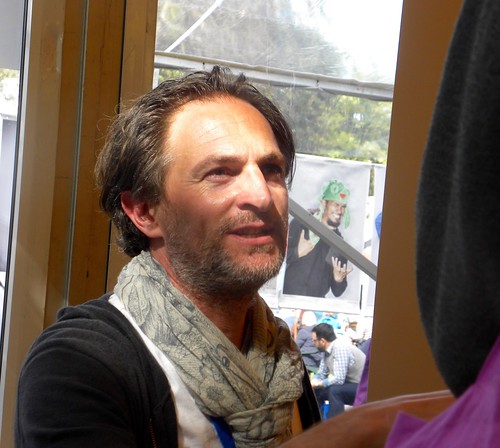 2 responses to “Some more Saturday in Charlotte Square”