When you know it’s the last book, it’s hard to see clearly. But reading Terry Pratchett’s last gift to his fans, The Shepherd’s Crown, I did my best, and I’m fairly sure it’s as wonderful a story as we hoped for. Maybe it would have been a bit longer if Terry had had longer. But it is most satisfactory as it is. 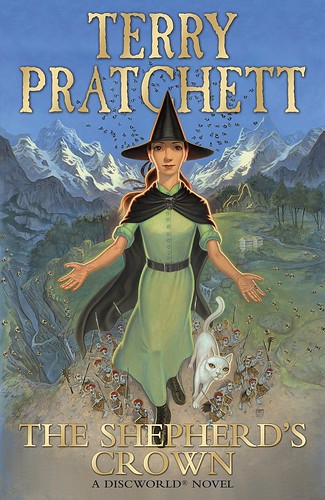 When reading about Granny Weatherwax and her approach to meeting Death, you can’t help but feel this was also Terry Pratchett’s way. Perhaps his real name was Esmeralda? He probably didn’t scrub the toilets in his house as Death approached, but he will have done the stuff he did; write books.

There are so many thoughtful thoughts in The Shepherd’s Crown, and so many words, good words, well used, that you can’t really tell that they were assembled by a man with Alzheimer’s. Most of us would be proud to write like this at any time.

I got that warm glow from reading, that one of the characters in the book discovers, once she realises that having carried one basket is not enough. You can go on doing things for others.

Tiffany Aching finds that you can fill someone else’s boots, even if you don’t think so yourself. Or you can use your own boots. That will also work just fine. Tiffany comes to countless understandings about witches and people and everything else in the world. And this is what we needed to hear. Terry sorted the world out for us, as much as he possibly could.

And there is a lovely new character, a male witch with an uncommonly good grasp of how people function. You simply cannot beat a decent shed.

One response to “The Shepherd’s Crown”