This is Carnegie medalist Tanya Landman’s new book, out next week, and it does what it says on the cover. There is a hell, and there is high water. There is plenty of other exciting stuff as well. It’s very clear why she was awarded such a prestigious award. 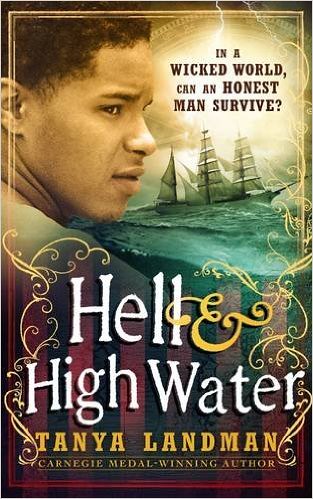 Set in Devon – albeit a Devon Tanya has altered to suit her needs – in the mid eighteenth century, it’s the story about Caleb, who is black, and his father Joseph, who is white. They walk from town to town with their Punch and Judy puppets, just managing to earn a living. One day disaster strikes and Joseph is accused of stealing, and is swiftly sent off to the colonies, leaving his teenage son alone.

Caleb finds his way to a hitherto unknown aunt, who lives in a fishing village with her young daughter and an older stepdaughter, Letty. They are poor, and they live in constant fear of being turned out of their simple home by the cruel landlord.

Tanya is not someone who writes about dark tragedy, only to let it end all sunny and happy. Here you want the bad things that happen to be turned around and for Caleb’s life to be all right. But the bad things don’t un-happen just because we want them to, and more bad things will join them.

Things are not right, but with Letty’s help Caleb tries to prove his father has been wronged and that someone is breaking the law. First there is hell, and later there is high water, and still things don’t change for the better.

But you have to believe that something positive will happen. This is a seriously riveting story, that will have you reading until you get to the end. You just have to find out if anything good at all will come of this.