I’m so old I have actually experienced the period in which Joan Aiken’s little book is set. And that’s really quite nice, because I almost felt that it was so lovely that it was all fiction. But it truly was that idyllic once upon a time. (Wasn’t it?)

The kind of time when ravens come and sort your life out. Become your pet, and generally cause mayhem. (Why do ravens feature in fiction more than other birds?) When there were actual unions for people who work, odd – but kind – policemen and children could be independent, thinking creatures. 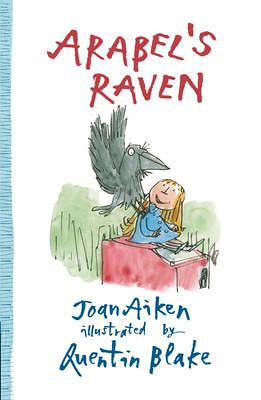 Arabel is a very young girl, whose taxi-driver dad brings home Mortimer one late night. Well, he didn’t know it was Mortimer (but Arabel could tell when she saw him that he was a Mortimer), and he was so tired he forgot all about the bird. I believe the bird might have been a wee bit tipsy, due to some unorthodox reviving done by Arabel’s dad.

Anyway, this short book is about more than slightly drunk birds in taxis. It’s a crime story, because someone is going round stealing stuff, and it’s not Mortimer. If anyone can solve the mystery it’s Arabel, who is able to walk all the way where she needs to go on just the one pavement and not cross any roads because small girls aren’t allowed to on their own.