By now you probably all know that Henning Mankell died this morning. His death is in the news everywhere, which just goes to show how far crime will get you. Even when you’re a foreigner, as Henning undoubtedly was to most of you.

I never did get that interview, apart from my impromptu four-minute one in the children’s bookshop in Charlotte Square; the place where he wasn’t guarded at all, unlike for his adult events. But we did speak very briefly, several times, including that first meeting when Son startled him by wanting a book signed that Henning didn’t recognise as his. It was his, though, and after some discussion it got sorted out.

Even then, Henning was a grand person, while on Swedish soil; walking round with a bit of an entourage. But that’s how Swedes do their worshipping. His star status in the English speaking world came a little later.

I knew he was ill, and ever the pessimist I expected the worst. But as recently as last week I felt a moment of optimism. I have a Facebook friend, whom I barely know, despite having ‘known’ him for decades (he’s GP Cousin’s very good friend). He’s rich, and he’s a rather radical leftie, and he does unusual things with his time and money. His latest venture is some museum for another well known Swedish radical, which is opening next month. And the encouraging news was that Henning was to do the honours. So I thought, ‘Oh, he’s well enough to do that then?’

Today’s sad news took my radical millionnaire by surprise too, as he was due to have lunch with Henning a few hours ago. Which I suppose was a good sign in itself; that he’d felt able to make such plans.

As for me, I’m glad we met a few times, and I’m even glad I cried at his event in Gothenburg eight years ago. He was a good man who did lots of good to lots of people, and that’s not counting entertaining us with Wallander. 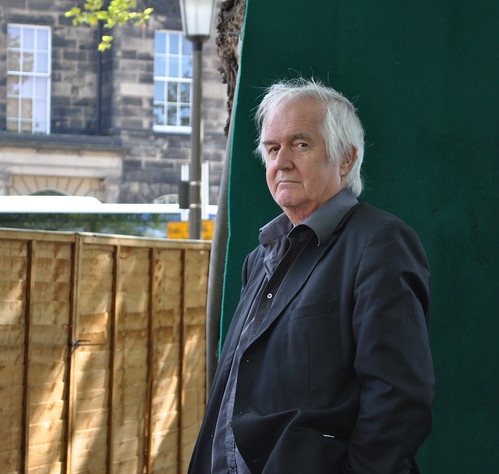 (I prefer this photo from some years ago, to the one my local Swedish newspaper used, where you can clearly see how unwell he was.) 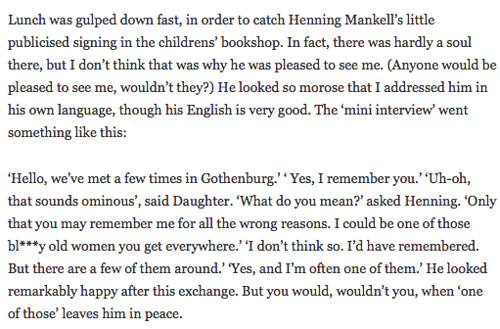 One response to “Hej då, Henning”