Sju förtrollade kvällar is the title of Mårten Sandén’s new book. You might remember Mårten from an earlier book of his which was translated into English, published by Pushkin, or his profile on here a couple of years ago.

This one isn’t, but I have been somewhat bewitched by his Seven Bewitched Nights (dreadful translation, I know, but roughly right), and I can’t not mention it. It’s another of the far too rare perfect little children’s books you dream of. Short and relatively simple, it still catches the interest of an adult reader, and there will be things in the book that perhaps the child reader won’t see. 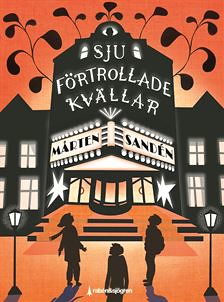 It felt surprisingly familiar in some way, and it took me a while to work out where I was (a romantic time travel film) in my mind. So, not terribly original; just very nicely executed.

The book is about 12-year-old Buster, who boxes and struggles with his homework. His dead, older brother Jack was his complete opposite. Buster suddenly gets talking to The-Girl-Who-Reads at school, and he also discovers what life is like for an older boy who is bullied, by one of Buster’s friends. And one evening Buster is given  seven old-style cinema tickets by an elderly man in town. From then on nothing is quite as it was.

I was transported right back to my childhood, in a charming way. Yes, OK, there were bad things. But this is nostalgia, as well as a story about how you live your life. And the cover is gorgeous.

(Life as an untranslated book isn’t easy. There are many good ones. But I hope this one can have a future in English too.)

4 responses to “It’s a Wonderful Book”