You remember those fire drills at school? They still have them, and possibly even in New York. The school in Rebecca Stead’s Goodbye Stranger [also] has intruder practice. Very sensible, when you stop and think. And more frightening as a concept than the fire drill. They have to practise making themselves small, and staying silent. 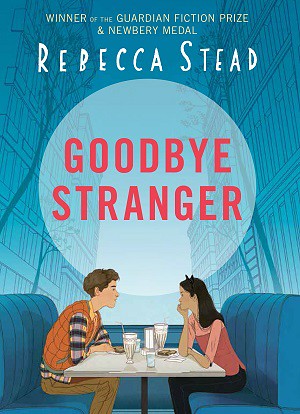 Goodbye Stranger is another sweet story about children of that in-between age where you are not a small child, but you are not yet a proper teenager. Although in seventh grade some of the students are beginning to outgrow their friends, and this can cause problems.

Bridge is a survivor, having had a serious accident in third grade, missing a whole year of school. She is currently wearing cat ears to make herself feel better. Her friends Tabitha and Emily each have their own problems to worry about, with Emily being the early maturing one, receiving attention from boys and older, popular eighth graders.

She’s not the only one, though, as Bridge makes friends with Sherm, who really likes her. They all appear to lead ordinary, happy lives, were it not for that one little thing that bothers each of them. Sherm’s grandfather has suddenly upped and left his grandmother, and Bridge had her accident, and Bridge’s older brother has the wrong friend.

Emily learns the hard way about exchanging texts with the boy she likes, and Tab and Bridge are there to help her. And then there is the anonymous girl who is having a really bad day, as we follow her around, without knowing who she is, but learning all about what troubles her. We can tell she’s close to the others, but not who she is.

As the year progresses the children develop, and they learn from their mistakes. It’s all pretty middle-class, and for the overseas reader it is charmingly New York-y.

And there is the question of whether Apollo 11 really landed on the moon, or if it was all a hoax.

This entry was posted in Authors, Books, Reading, Review and tagged Rebecca Stead. Bookmark the permalink.