Light on Dumyat is an old book, but not as old as I’d believed. First published in 1982, Rennie McOwan doesn’t say when it is set, but I’m guessing the 1950s. There are sheep in the middle of Stirling, and that rather determines the period. As the Resident IT Consultant said, there were just about sheep in his time, so I’m thinking this is a little before then. 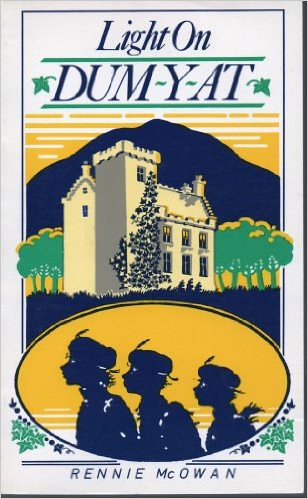 Not that Stirling isn’t interesting, and Dumyat, which is a hill in the nearby Ochils, is as worthy as anywhere. You can tell that Rennie knows about walking and living wild. Light on Dumyat is basically the Famous Five in the Scottish countryside, and by now a wonderful period piece as well.

The book features 12-year-old Gavin who comes to stay for the holidays with his aunt and uncle near Stirling, and this young Englishman really takes to the hills. He meets three local children who seem to have adventures all the time and they set him a challenge to see if he can join their gang.

Gavin is stronger and more cunning than they thought, but the whole adventure is sidetracked when thieves try to steal his uncle’s valuable silver. That’s when his new friends really come into their own.

Very nice and innocent, and the kind of thing I’d have lapped up at the right age. Now, I’m too unfit to attempt Dumyat [that’s dum-eye-at], so will have to gaze at it from afar instead.

(I see there are a few more books about these children.)

3 responses to “Light on Dumyat”