That FBI. It gets everywhere, including the 17th century. But that explains a lot, actually. And it’s lucky they wear those fetching overalls, with the letters on the back, so you will know it’s them. And there is always one more wormhole through which any combination of characters can fall, to some time other than their own. Quantum foam. Hah.

Yes. So Eoin Colfer thought it’d be more normal to write about time travelling FBI agents than leprechauns. It’s easy peasy getting your head round tunnelling dwarves and foil-clad centaurs, but my head always gets confused when it tries to think about time travel. Like, if so-and-so did this then something would/would not happen. And you mustn’t meet yourself. 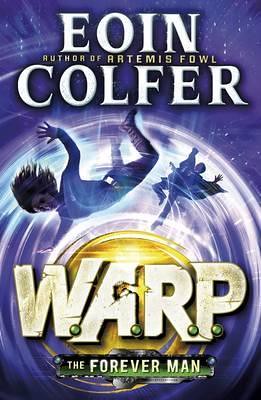 I enjoyed The Forever Man, which is the last instalment of Eoin’s W.A.R.P., the time travel-based witness protection scheme which put people safely in Victorian London. I wasn’t sure I would, as the time travel slipped back to Cromwell’s days – which I’m not keen on – and Riley’s old boss was going to reappear. I’d really hoped to have seen the last of him. But that strange thing happened; where you find yourself almost fond of the baddie, because you go a long way back and familiarity doesn’t always breed contempt.

So – the now unkillable – Garrick is back, and his latest hobby is to burn witches at the stake. And he decides Agent Chevie is a witch. Riley needs to free her, but the trouble is that he and Garrick know each other so well, that it’s almost impossible for one to trick the other. Luckily the FBI has one or two tricks up its sleeves, and not everyone in this witch-hunting village believes that burning witches is a marvellous idea.

This is exciting, and romantic – yes – and funny. It even restored my faith in the FBI.

Eoin; please consult me if you need more timetravelling Swedish bores. Sorry, boars. Or similar. Especially if they are to be called Olaf.