When I first joined Facebook – and I must point out I only did it for literary reasons! – I was quickly introduced to lots more authors than those I already knew and corresponded with. It’s that automatic suggestion system thing they have, and before long I was awash in new – to me – authors of children’s books.

Some of them I’d barely heard of, and I had not read anything by them. But then I discovered a new category of people. I don’t want to call them wannabes, as that sounds childish, and as though you could become a published author if you only wish for it enough.

Hopefuls, maybe. Those fully intending to be out there with published books very soon. I was amazed at how they all seemed to know each other, too. I was under the impression that garrets were there for a reason, and when you weren’t even published, how could you know others who were also not published?

Seems there are groups for everything under the sun. They knew each other because they attended writing groups, or critiquing groups, or any other kind of authorial group. They supported each other. They were friends.

But I was always afraid that when they did get published, I ‘would have to read’ the books and that I wouldn’t like them.

Well, that was almost as silly as my other ignorant thoughts, because the books have all been great. Many of the ‘hopefuls’ were published around the same time, like Keren David and Candy Gourlay and Jon Mayhew. Teri Terry wasn’t far behind. But so far Kathryn Evans hasn’t joined them. Until now.

It’s almost more exciting, after such a long wait. Not everyone writes at the same speed, and of course, I never knew where in the process people might be when I first encountered them. And Kathryn has strawberries to grow, and bellydancing to do. 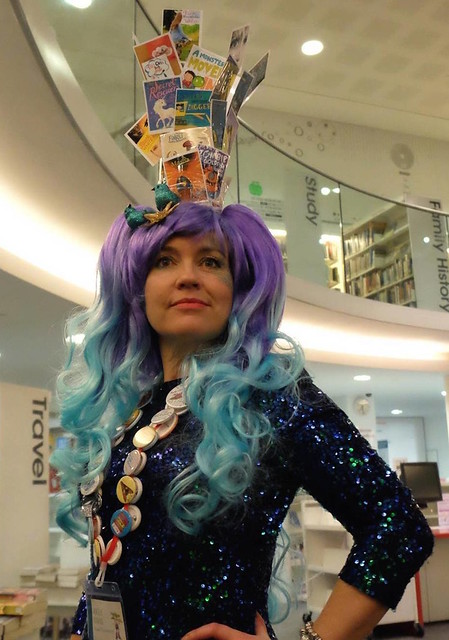 Here she is, at the recent SCBWI conference, wearing purple hair and the covers of books being published by her SCBWI friends this year. (In other words, perfectly normal…) Kathryn’s own book – More of Me – will be published in February. I’m really looking forward to it.

9 responses to “The new kids”