Travel the World with 30 City Maps. It’s Non-fiction November, and here is an atlas to inspire the reader to visit lots of cities all over the world. Or possibly ‘only’ read about them, which is equally fine.

Written by Georgia Cherry and illustrated by Martin Haake, this atlas is a little on the large side to actually travel with. It’s more for inspiration. The double page spread for each city is not so much an actual map, as a colourful sketch of the city, showing many of its most famous landmarks and pictures of people and possible activities. And for every city, if you look closely enough, you will find a small person saying hello, in the langauge of that country. 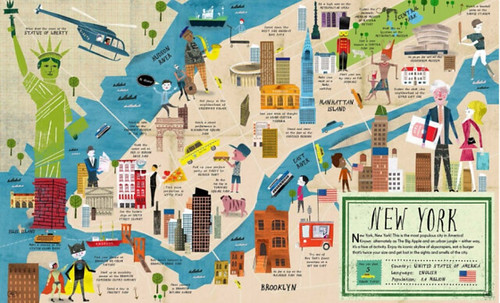 Sketch it might be, but looking at the cities I know, I feel it’s quite accurate. For Stockholm they’ve got Långholmen to the west and Gröna Lund to the east; just where they should be.

In London Henry VIII is skateboarding just where he always does… hang on, maybe not. But you get the right flavour for each city. (Not sure that fried fermented herring will tempt the Stockholm visitor, but it’s genuine.)

It can be quite tricky finding the small person greeting you, which is presumably intentional. That way you see everything there is to see while you search.