I have to admit to a certain level of addiction. The older I get, the more interested in mid-20th century design I become. Not only is it fashionable, but it reflects my childhood. And Mother-of-witch might have been relatively poor, but when she bought things she bought nice things.

Anyway, this is about books. Whenever I see something by Orla Kiely in a shop, I know it’s by her. The style is distinctive, and I first encountered her and her designs in two boardbooks. Hence my belief that she has to do with books more than interior design. Had I known at the time I’d probably have turned my eyes heavenward and muttered something about how everyone thinks they can do children’s books. But I didn’t, so my eyes stayed where they were.

Besides, I liked the books. 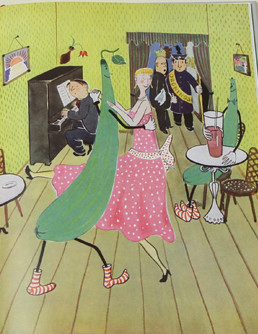 But I got confused when reading recently that one of my favourite – and very popular and expensive – Swedish designers had illustrated one of the picture books I had as a child. Turns out he didn’t. Stig Lindberg, who is best known for his green leaves – and yes, Mother-of-witch had a lot of green-leaved china – did in actual fact illustrate Krakel Spektakel by Lennart Hellsing [who died last week]. 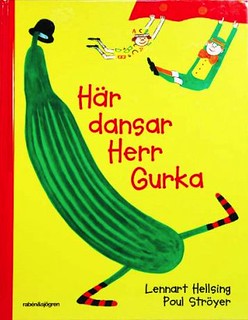 Except, not my edition. That was by Poul Strøyer, who is also very good, and I’m a great fan. It seems Stig Lindberg only did some early Hellsing books, before he went on to concentrate on dining implements. That’s why I didn’t know the Lindberg version of Mr Cucumber dancing the mazurka. (It rhymes in Swedish.)

So I don’t mind having read the other book as a child, but the adult in me rather fancies the original illustrations too.