The Mixed-Up Summer of Lily McLean

What we need now, as one storm follows the last, is a summery book. And The Mixed-Up Summer of Lily McLean is it. Scottish summer, but still.

Think It’s a Wonderful Life, and you’ll be on the right track. Poor Lily doesn’t know what to think. She hears a voice. She could be crazy, or she could be pursued by a ghost. Both are awkward when you are eleven, living in a cramped council house with you mother, older sister and three younger siblings. She has her own space, under the stairs, where she occasionally hides. (Personally I don’t see how there could be any spare room in there, if it’s such a small house. But the Harry P reference is a nice one.)

Her teen sister refuses to go with their gran on holiday on Cumbrae, so Lily gets to go on her own, with their rather loud and opinionated grandmother, to spend a week in a caravan. Or does she? Will Lily’s ghost/craziness prevent her one and only holiday for the summer? Even if it’s only the ten minute ferry-crossing from her hometown of Largs, over to Cumbrae. 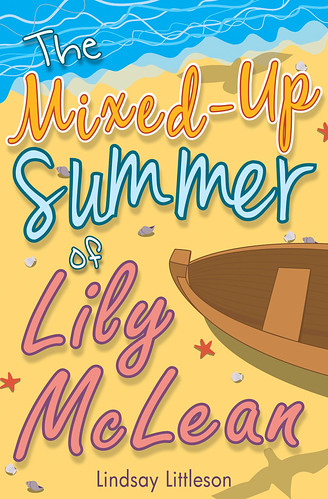 This is actually rather nice. It’s not just the family’s circumstances or lack of money and drunken ex-stepdad and friend problems, and skipping the last week of school. You think you know what you are in for, and then the ghostliness adds another dimension to what could have been a fairly ordinary story. You can tell something major must happen, but what, and how?

Admirably short and an easy read, but still full of everything that’s important in life.

And now I want to go to Cumbrae.

This entry was posted in Authors, Books, Reading, Review and tagged Lindsay Littleson. Bookmark the permalink.