Stuff You Should Know!

There is a lot I don’t know. Like what the insides of things look like, or how those things with insides work, and any number of other similar facts.

In Stuff You Should Know! by John Farndon and Rob Beattie you can find out. I don’t remember well, either, but will admit that since looking things up, I have thought of how my mobile phone knows what my finger is doing when it dabs or ‘paints’ a line on the glass screen. It appears to be magic, but it seems there is some sensible logic behind it.

I don’t need to know these facts, but I can see that lots of readers would like to. And the younger they are, the likelier it is they will understand and remember. I’m just pleased I can use a food processor. No more is needed.

And the extra long explanation of how a letter makes its way from one end of the globe to another was probably something I did know. Maybe it’s because I’m old. And with a postal past. 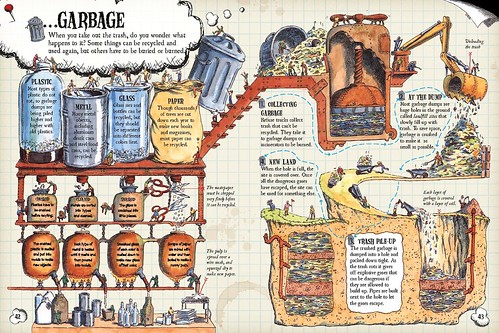 Weather, rubbish* and 3D printers all get an airing in this fascinating book of facts. I wish I was younger! (On the other hand, new-fangled ideas won’t have time to take a hold these days. Someone is bound to invent new stuff before today’s children are very much older.)

(*It says rubbish in the British version.)