She was a star 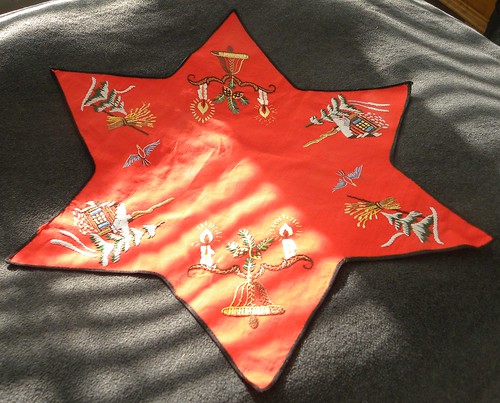 I never met her, and sometimes it’s hard to be sure whether you miss someone you didn’t know, or not. I’m thinking she was probably a blend of her four daughters, all of whom I knew and loved. That makes it easier, I think.

Roundabout now we have mostly sorted out what to give to whom. Or so I hope. My unknown grandmother lived a long time ago, but I am certain she will have had similar thoughts. What to give. How to afford the gifts, and so on.

Just think. I’d be hard pressed to find the time to embroider one in the run-up to Christmas, let alone five. Especially if secrecy was required. I’m assuming this was in the 1930s. She had five children (although, a few were getting on by then) and a home to run and meals to prepare. She also cooked for other people.

Wherever we went at Christmas, the star would be there. Because they all had their own star adorning a table. To me this star is Christmas. And I rather wish I could have met its maker.

This entry was posted in Blogs, Christmas, History. Bookmark the permalink.

One response to “She was a star”