This is India’s answer to The No. 1 Ladies’ Detective Agency. Vaseem Khan has written a sweet and funny crime novel about Inspector Chopra, who is forced to retire on health grounds from the police in Mumbai. In his early fifties, he is an honourable man who has always tried to do the right thing, and who could never be bribed.

In The Unexpected Inheritance of Inspector Chopra we meet him on his last day, as he agonises over what will become of him, now that he no longer has a job to go to. His wife, Poppy, is rather pleased he will be staying at home, but of course he ends up doing no such thing. 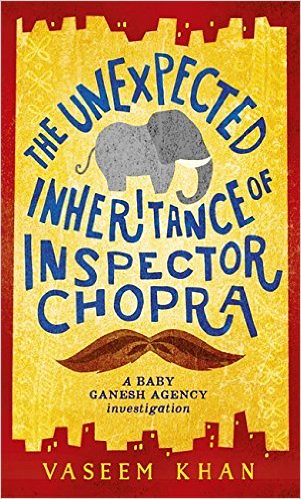 First there is the baby elephant. His uncle has sent this large gift for a reason. It’s just that ex-Inspector Chopra can’t work out what that is. And on his last day in the office he meets the distraught mother of a murdered young man, and rashly takes on the task of finding the murderer.

Chopra is a brave and determined man, who will let neither a bad heart or old colleagues stop him from doing what’s right. And then there is Ganesha, the baby elephant. The Chopras live in a tower block, so keeping even a small elephant is tricky, but Poppy is as determined and fierce as her husband is honourable. There is a priceless scene when she and Ganesha sit down in the living room to watch Bollywood films together while snacking on goodies!

The murdered young man leads Chopra to many bad and seemingly impossible discoveries. And who can he trust, when everyone can be bought?

This is a nice, comfy kind of whodunnit, set somewhere exotic to the European reader, and very satisfying. Described as a Baby Ganesh Agency story, I wonder if there will be more? There certainly could be. Elephants are as loyal and dependable as the former Inspector Chopra.

(And the food! Poppy prepares the most wonderful dishes for her husband. He has little time to eat while out solving crimes, but oh, how delicious it sounds.)