I know, I know. I said that Rachel Hartman’s Seraphina was a standalone, and better for it. I was so wrong. Here is the sequel, Shadow Scale, and it is at least as marvellous, if not better. Whereas the reader won’t have that delicious sense of surprise that they ought to have got from Seraphina, here you have the satisfaction of finding out why we met certain characters in the first book. 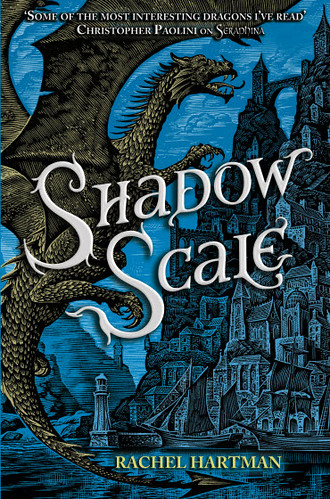 I mentioned some imaginary people. Hah. Now that Glisselda is Queen and she is betrothed to Prince Lucian, they ask Seraphina to help against the looming war with, well, I think some, but not all the other countries. It’s not as simple as dragons versus humans. Seraphina is half dragon and half human, and so are quite a few others. Those ‘imaginary’ characters, for instance.

It is believed that the ityasaari, as the half and halfs are called, have special skills, and need to be gathered in one place, so that they can do what is necessary to save the country of Goredd. Seraphina is sent out to the rest of the world to find them and bring them back.

Not all ityasaari want to be collected or to help, and there is a Judas figure, who uses all her skills to thwart Seraphina and the royal couple. If you forget that the dragons are dragons, and the ityasaari are ityasaari, you find instead the same kind of differences we have here on Earth, in our world. There is prejudice and there is coexistence, and none of the ityasaari is the same as another.

As is often the case, it was a bit hard to get back into the swing of things; remembering who’s who, and all that. Shadow Scale comes with the best ever quick summary of what has happened that I have seen in a novel. (Thank you!)

Very, very exciting, and there are some beautiful friendships, as well as more romance, and not exactly as you would have expected, either.