Queen of the Silver Arrow

Caroline Lawrence has written a story to inspire girls that they can do more. Admittedly, the cover features a beautiful girl with a bow and arrow, and I understand that recent films (and the books behind them) have made bows and arrows the thing to have. But why not? 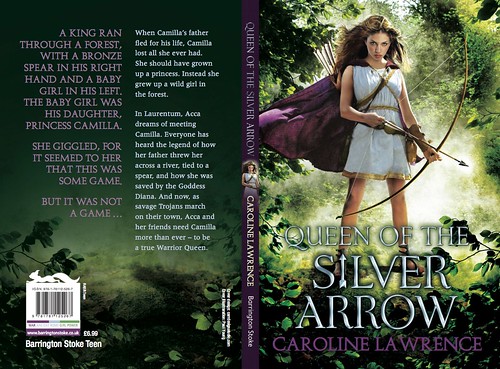 This re-working of Virgil’s The Aeneid for Barrington Stoke tells the story of Camilla, who is the Queen of the Silver Arrow. Her father, who’s a King, brought her up in the woods where he fled with his baby daughter, and she learns to be of service to the Goddess Diana.

Camilla’s story becomes well known in the neighbourhood, and Acca who is the same age, dreams of being like her, and so do some of the rich girls in town. Eventually they all meet and Camilla trains the girls to be warriors, something that becomes necessary when the Trojans arrive.

Violent and bloody in parts, it’s still a beautiful piece of history (it was real, wasn’t it?), and as I said, very inspiring for girls. It needn’t all be about getting married. Or at least not without doing something worthwhile first.

Sometimes we all want to be like an Amazon, although perhaps stopping short at baring a breast.