Kathryn Evans’s launch earlier in the week went very well, as I might have mentioned. Books selling out and bookshops being tightly packed and all that. Here is a photo I may have stolen from Candy Gourlay, which shows how happy Kathryn was and how they couldn’t possibly have fitted me in. 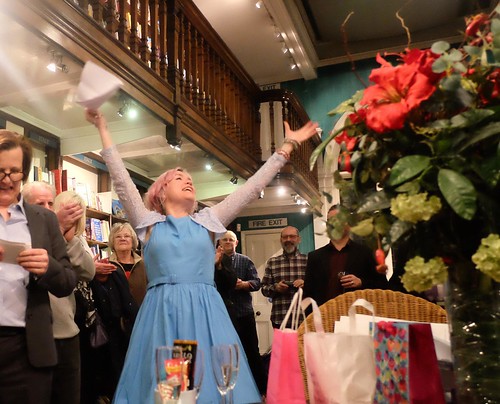 On the same day the list of authors taking part in the 2016 Yay! YA+ in Cumbernauld was announced, after organiser Kirkland Ciccone had had me on tenterhooks for a long time. Some I know, some I don’t.

And the programme for Glasgow’s Aye Write! has now been made public, and you can get your tickets very very soon. Please do! They always have so many people coming that I want to go and see, that I have to give myself a stern talking to and remind me that I don’t have the stamina for traipsing to Glasgow all the time. But there is one event I must go to. Have a look through the programme and see if you can work out which one.

It was National Libraries Day yesterday, and the Guardian published love letters to libraries by people such as Meg Rosoff and Ann Cleeves.

The Branford Boase longlist was announced this week, and I have read precisely one of the books on it. I don’t know what’s wrong with me… And the odd thing is that even though it’s for first novels, I could swear some of those authors have been around for years. It’s probably just me again, isn’t it? To the list: