How can I have imagined – and then forgotten – a whole series of books by Enid Blyton? Especially as it appears they were never translated. Please tell me I’m not crazy.

I adored Enid Blyton’s book’s and I read every one that I could lay my hands on. There is nothing like a first love, and hers were the first ‘real’ books I read; ones with only words and chapters, and no pictures.

Looking at the books from my British vantage point, I see that the titles I remember are not always what you’d expect them to be in English. Nor are the characters necessarily called by their original names. And apart from the Famous Five, and to some extent the Adventure series, I have only a hazy recollection of the books, where once I could have listed every member of the Secret Seven.

But now Hodder are re-publishing The Secret Stories. Four of them were out in January and I have just been sent one, The Secret Island. 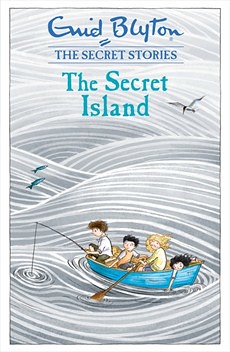 I began by thinking it was a nice cover, although not in the slightest how I feel this old book should be portrayed. And then I thought ‘hang on, I don’t know this book!’ It’s Blyton’s first, originally published in a magazine in 1937-1938. I was OK with this, feeling there must be plenty of books that never made it across the North Sea.

So I started leafing through the book, to see if any bells rang. The names of the children sounded totally alien. Peggy, Mike, Nora and Jack. I never knew any children like that! Except, I did recall a Jack (I know, there’s another Jack).

The beginning didn’t feel right. But as I read up on the plot and its development I definitely remembered it. I boldly cheated and went to the end to see what would happen, and I’m dead certain I’ve read that. Both what Jack did, and what happened to him.

Once I’d got that far, I started Googling and looked on Wikipedia, in both languages. It doesn’t exist in Swedish.

So how can I remember it?

This entry was posted in Authors, Books, Languages, Reading and tagged Enid Blyton. Bookmark the permalink.

4 responses to “The Secret Stories”