Five years on, the Mitchell Library in Glasgow looks the same. It’s just that in my mind I couldn’t make my photographic memory of what I call the ‘Sara Paretsky room’ match up with the ‘Julie Bertagna café’ area. After my search for the Aye Write! box office yesterday – I only had to ask three people – I was able to connect the five year old dots. Turned out I didn’t need a ticket after all…

The Mitchell is a nice place, where people come to use the computers and eat in the café and take their shoes off and strum their guitars. Warm too, but I was reluctant to remove my jacket in case the fire alarm would see me and go off.

Anyway, I made it all the way up to the 5th floor for Meg Rosoff’s event, and sat down to wait, surrounded by several seriously psychedelic carpets. Getting an authorly hug was nice, and I was glad that Meg had put me on a list to get in. The audience was exclusively female, if you don’t count the two male Aye Write! volunteers.

Introduced by local author Zoe Venditozzi, Meg discovered she’d already gone native by saying she’d talk a ‘wee bit’ about Jonathan Unleashed. She’s feeling ‘happy and well adjusted’ at this stage between writing and publication, unlike when she feels that ‘there will never be another book and my family will starve.’ On the other hand, good writing requires that she keeps ‘that balance of terror and confidence.’ And ‘maybe [Meg’s] brain is emptying out’ of books…

Meg told us how she woke up in August 2013 with the first line of the book, and just knew this was going to be her next book, without knowing what else would happen or why. Being what she calls a bad plotter, she described how her good friend Sally Gardner tends to come to the rescue. Sally was also able to see who Jonathan’s romantic interest should be.

She loves Lucky Jim, and she doesn’t mind stealing plots. Jonathan is a big ‘numpty’ really, and she read the bit where he first takes ‘his’ dogs to the vet’s. Meg apologised for not being able to do a proper British accent, after all her years in England.

Greeley, the character of uncertain sex in the book, is the way he/she is because it’s how Meg feels; never quite fitting in and not managing to heed her mother’s advice to be ‘more ladylike.’ In her writing she gives her clueless characters friends in order to help them. She said how together, she and her husband Paul are not ‘so nutty’ as they would be on their own.

Penguin dropped her when she wrote this adult novel, and Meg said how exciting it was to have Jonathan Unleashed auctioned both in Britain and in the US. Meg didn’t exactly mince words, and one of her more quotable lines yesterday was how ‘one could if one were a more generous-minded person.’ And then there was her first work, the ‘dark pony book.’ She blames the internet, which is where weird people find more weird people interested in the same thing, like My Little Pony or dinosaur sex.

Asked what books she has enjoyed recently, Meg mentioned Henry Marsh’s Do No Harm and that old ‘children’s’ classic A High Wind in Jamaica by Richard Hughes. (If Meg were to see a child read it she said she’d take it away from them.)

To sum things up, novel writing is basically about getting stuck halfway, suffering, and tearing your hair out. 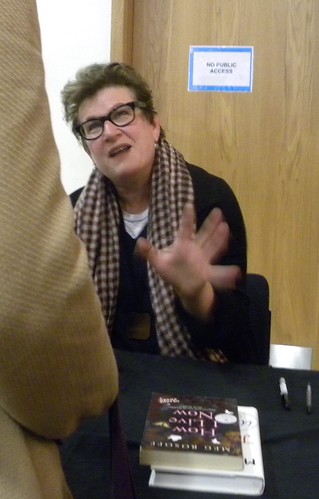 And on that cheerful note we ran out of time. Not wanting to walk down five flights of stairs, Meg and I and a librarian got the lift down, after which we realised we had no idea where Meg was supposed to do her signing. We found it in the end, but the search was a new and different experience.

Wanting to take me out for a drink afterwards, Meg asked around for ideas of where to go. We left the building, only to stand on Julie Bertagna’s corner outside, staring at Meg’s mobile phone app. Which might have been upside down. The phone, not so much the app. Once we’d turned the motorway the right way round, and rejected one Indian restaurant, we ended up at the Koh-I-Noor, which I in my witchy way had clocked as I crossed the motorway earlier.

I clearly sensed it was for me. We shared their sharing vegetarian thali (apparently Meg is veggie these days, unless she is force-feeding Cathy Cassidy chicken stock) and gossiped about publishing, authors, children, growing older. And then I went off to Charing Cross for my train and Meg limped bravely back to her hotel, blisters from new boots and all.

Which, more than anything, brought home to me how hard the lovely people who write books work, travelling all over the place to meet the readers. Not just favourite authors, but all of them.