I enjoyed this book enormously. Philip Caveney’s new novel The Calling is an exciting and hilarious caper across Edinburgh, Philip’s new home city, and Manchester, his soon-to-be former home. 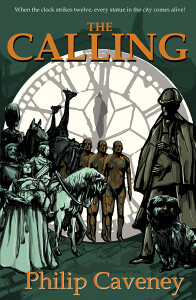 It’s not often that I can recognise a pub from a short description of its exterior, but I had no trouble identifying the green tiled building that the main character Ed vaguely remembers, which is about the only thing he does recall. He seems to be suffering from amnesia, so has no idea who he is or how he ended up in Edinburgh, with no train ticket and no money. And life’s not made any easier when Ed finds himself awake at night, the only human in a city full of statues who have come to life for 24 hours.

The statues name the 13-year-old Ed, after Edinburgh, and the majority of them want to chop his head off to make sure he stays quiet.

This is fascinating stuff, and after meeting the characters who usually stand so silently all over Edinburgh, I’d quite like to walk round the city and say hello. (This could be a touristy sort of book, seducing young readers into wanting to look at the sights, whilst teaching them history.)

Anyway, some of the more sympathetic statues reckon Ed needs help and who better to assist than Sherlock Holmes? Sherlock is a crafty old – well, actually, fairly recent – statue, who’s got plenty of tricks up his deerstalker, and he and Ed start unravelling the mystery of the Softie who stayed awake.

At the risk of offending old Sir William, pardon, Walter Scott, I’d not heard of Peveril of the Peak as anything other than a Manchester pub. But we live and learn. With the help of James Clerk Maxwell, and a small terrier called Bobby, Ed and Sherlock engage in some sleuthing as well as a spot of portal hopping.

It’s a surprisingly likely story in the end. Except possibly for what goes on in Chorlton, but that’s Chorlton for you. You need to be more circumspect.

(Fledgling Press are onto something good here, I reckon. This is Philip’s fourth Edinburgh-based book, and I can see how attractive an idea this is, for local readers, as well as for visitors. And the Scotland-Manchester combo is one I find suits me.)

One response to “The Calling”