The Girl in the Blue Coat

Set in the Netherlands during WWII, Monica Hesse’s novel is about 18-year-old Hanneke who delivers black market goods around Amsterdam for her boss. It’s not quite resistance work, but it’s not legal or safe. Hanneke learns how to flirt with German soldiers, so they won’t think of what she might be carrying, right under their noses.

That’s until the day one of her customers asks her to find a Jewish teenage girl for her; someone who has gone missing from the hidden room where she was kept. Hanneke is reluctant, but she is good at finding things. 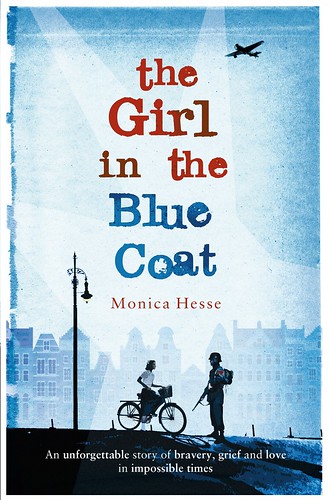 This is interesting, because it shows us the war in yet another place and from a different angle than the usual ones. I didn’t know all that much about the Dutch in the war, except for what you learn from Anne Frank.

You can’t really know what people are like until something happens which proves that some are much better human beings than you’d thought, or occasionally, much worse. It seems that more people were satisfied to be quietly cooperating with the German invaders. I don’t know whether this is true, but Monica has done a lot of research. She knows what food people might have liked, and she’s discovered a lot of Dutch facts. However, to my mind, the book has quite an American feel to it, which is hardly surprising as Monica is American.

The plot is exciting, though, and as always, I should have paid full attention to what gets mentioned, as it all turns out to have been relevant in one way or another. Though I did guess at one of the core secrets early on.

A very enjoyable read, if you can say that about a Holocaust novel. There is a lot of bad, but also much that is good.

One response to “The Girl in the Blue Coat”