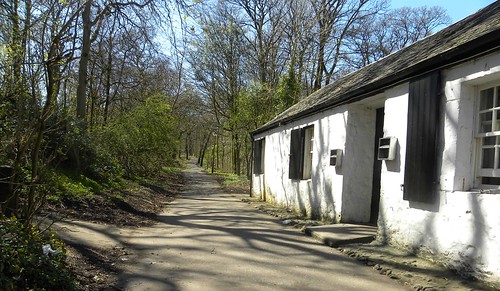 I swear I didn’t enter Cumbernauld Theatre yesterday morning, uttering the words ‘do you know who I am?’ I merely wondered if they needed to know who I am. You know, similar question.

(I suppose I should be grateful I arrived at all. The Resident IT Consultant was to give me a lift. What he’d omitted to consider was the amount of diesel a pumpkin likes to have in order to go all the way to Cumbernauld. It did. It even got him to the nearest petrol station after, so he could drive home.)

It’s interesting how the meaning of the term YA keeps slipping and sliding. Yesterday I suspected that what it meant was that the books were by young adults, and not just for them. In my mind I categorised the authors present as the teenagers, the debutantes (I know), the old hands (those with three published books) and the grand ‘old’ lady (sorry..!). Kirkland Ciccone had done his best to find authors I’d never heard of before. 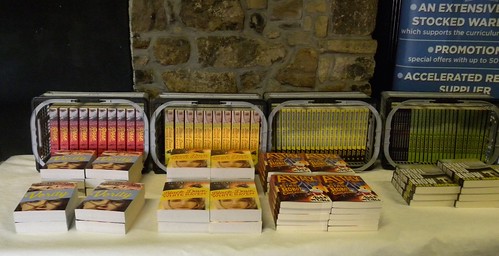 And when Googling Kelpies Prize winner Alex McCall it is well nigh impossible to find anything that doesn’t suggest he’s an older man who has a lady detective in Botswana, but no, it’s not that one. The other Alex (Nye) also has a prestigious award under her belt, the Royal Mail Award. And organiser Kirkland won the Catalyst prize. Elizabeth Wein has won a number of awards, including the very valuable Bookwitch second best book ever. 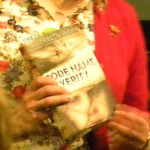 I’m glad that’s the novel Elizabeth chose to talk about in her session in the bar. Not just because it’s such a favourite, but because I’d not heard her in an event about Code Name Verity before. She read a bit, down in her ‘cave,’ and then she showed the children her silk map, and mentioned that one author who inspires her is Hilary McKay. (Such a wise choice!) 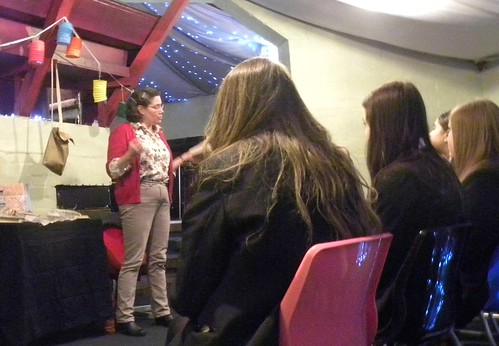 If you’re wondering why the others have not won prizes, it’s because Victoria Gemmell and Martin Stewart have only just got their first books out (Martin’s not actually officially out, even), and Estelle Maskame is only 18. Not that that should stop anyone. 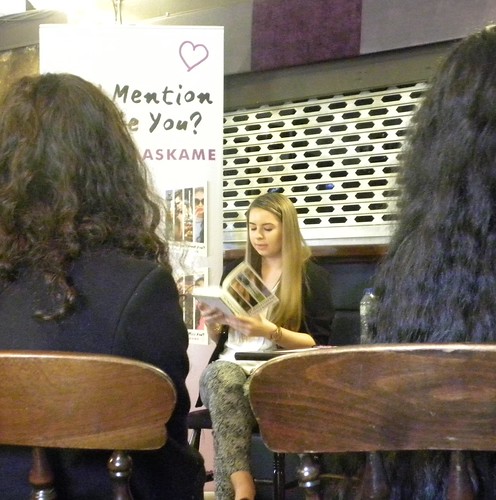 Estelle was in one of the other bars, where she read the first chapter of what I will probably always call DIMLY, when it should be DIMILY, Did I Mention I Love You? She’s one of these online wonders with millions of hits who has gone on to be published ‘properly.’ Estelle began writing her first book (it’s a trilogy) when she was 13… It’s apparently very popular, and I can sort of see that I’d have liked it when I was 14. And as for becoming a role model for pupils barely younger than herself, I can see how that works. 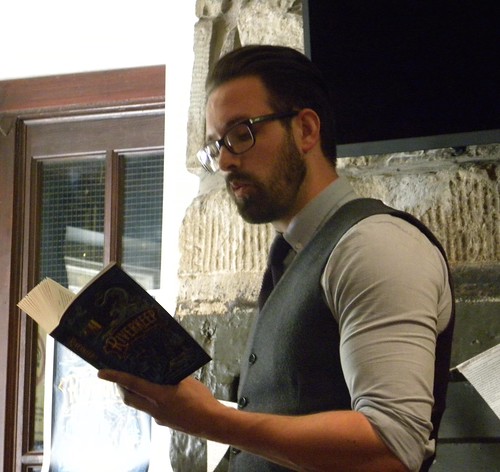 In the third bar was Martin Stewart, more or less stuffed in a fireplace, who also read from his book, Riverkeep. It’s based on the Glasgow Humane Society, which seems to be about fishing people out of the river Clyde; either dead or alive. Martin is a former teacher, who gave up teaching when he was offered a book contract on the basis of a short story he’d written. 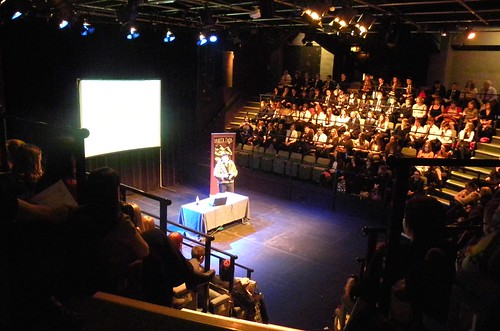 That was my afternoon in three bars. The morning was spent in the theatre itself where Kirkland introduced Alex Nye, before ‘exiting’ – by that I mean standing just behind the rows of seats – and allowing himself to be interviewed very loudly, drowning out poor Alex and making the audience laugh.

Alex did much the same talk as she did in Dunblane in November, and I think it’s a good one, which works well for a secondary school audience. This time her spooky sound effects worked fine and added a certain something to her ghostly readings. I especially like her 007 and M photograph from Glencoe. 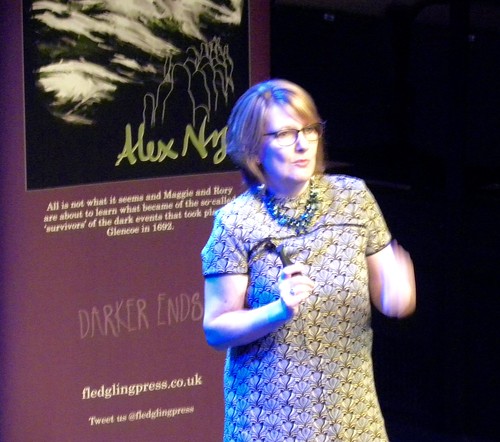 This ‘failed’ waitress who still hasn’t got the red sports car she craves, got lots of good questions from the children, so now we know she writes accompanied by Kate Bush, and that she admires Marcus Sedgwick (that rather explains the spookiness). Her next book about Mary Queen of Scots will be out in July.

Then Kirkland himself took over and basically did half an hour of stand-up comedy, that no author in their right mind would want to appear after. Luckily there was no one else after the exploding houses of Cumbernauld or Kirkie’s older brother the Tesco robber. He did mention Meg & Mog and Winnie the Pooh, but only to follow with Stephen King and some seriously bad book covers.

He wore his leopard jacket again, and teamed it with failed black hair. Apparently he had been aiming for blue. 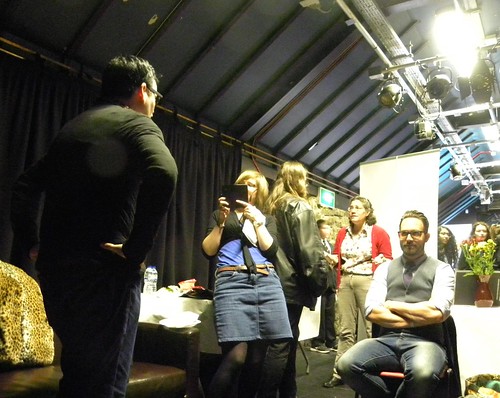 Lunch was nice, with lots of things I’d have liked to eat but couldn’t. Luckily the others made up for this, and Alex Nye did some heroic work on the macaroons. Victoria Gemmell had handbag trouble and spent quite some time jamming an enormous pair of scissors into the zip. I’m not sure if that helped. Kirkie said she ought to give me a copy of her book, but unfortunately Follow Me sold so well that it was decided she shouldn’t. (I gave Victoria my card.)

If you are thinking I’ve not reported on either her or Alex ‘not-Botswana’ McCall, you are correct. Kirkie stashed them down in the changing rooms, and whereas they both returned reassuringly unchanged, I vowed last year not to go down there again. (And after hearing one of the ushers telling me and Alex Nye about their resident ghosts, I feel less inclined still. Alex, on the other hand, looked ready to come back to investigate.) 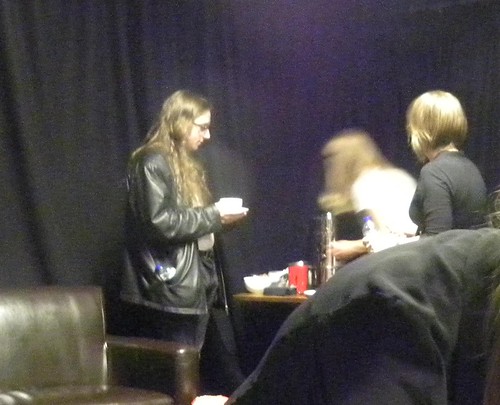 I had a little look at not-Botswana Alex’s award winning book Attack of the Giant Robot Chickens, as I’d understood it to be for much younger readers, but if that is the case, I have to consider myself younger. It looked quite promising. And I’d have loved to hear Alex speak. He still looked as young as he is (that makes sense, doesn’t it?), but seemed nice. Perhaps our paths will cross again. 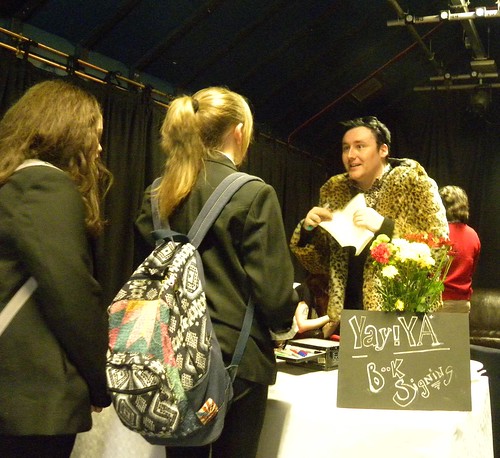 There was a sort of book signing at the end. Some of the small venues overran, and some schools had had to leave to get back on time, but there was still a throng of fans in the queue. I decided I was in the way, so escaped into the car park where I was recognised as ‘the witch from last year’ before my newly fed transport arrived for the second time in one day. 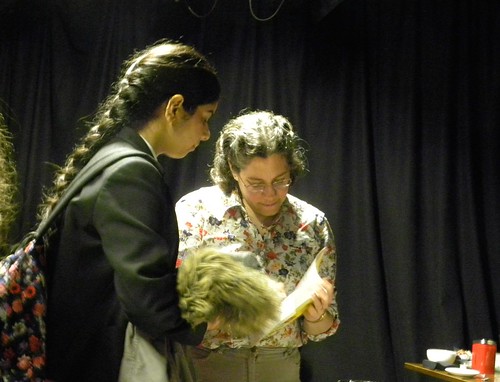