And so is ‘his’ King. But never mind that little coincidence.

Do you remember Sven Nordqvist? Creator of Pettson and Findus, the cranky old man with the cunning – but kind – cat. I’m a bit surprised he is that old, to be honest, but like many Swedes he has aged well.

I like Pettson. And, all right, I like Findus, too. And Sven has a past in my old home town, so I feel sort of at home with him as well, and that crankiness is something I can sympathise with.

His famous characters first appeared 33 years ago, well before I required any picture books with lots of words for any Offspring, and had we not been given a copy by someone who knew what we were missing, we might never have been introduced. After all, who does not like pancake cake? (And when I make it, if I do, I don’t have to deal with hens and other complications first.) 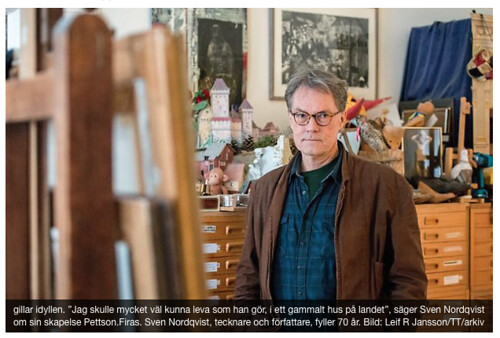 Somewhat surprisingly he lives in a flat in the middle of Stockholm. You’d think he’d be hiding out in the wilderness, behind those clucking hens and other creatures.

And it seems that while Sven likes praise as much as the next illustrator of opinionated cats, he gets so much of it from people like me (that’s old and keen bookish females), that it no longer registers. He prefers to hear it from young readers.

According to an article in Hallandsposten the other day, these days Sven mainly works on what pleases him; drawing for himself.

I suppose today he could always pop over to the Palace with some freshly made pancakes.

2 responses to “Sven Nordqvist is 70 today”