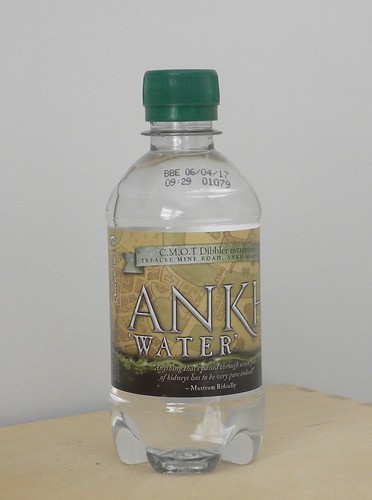 I overlooked this bottle the other week, as I carefully photographed everything that was in my Terry Pratchett partybag.

I was extremely thirsty that evening, but this bottle of Ankh water was safe from me. I’m not sure I can ever drink it. One, it’s a precious memento. Two, is it safe to drink Ankh water?

Surely it’s a fairly questionable substance? So on balance I reckon it will be better for it to grace some surface or other at Bookwitch Towers, and I can smile at it as I swoosh past. It’s got a reasonable date, after all.

And to return to harping on about libraries, I know I forgot to mention the Beaconsfield library two weeks ago. They have decided they want a plaque outside in Terry’s memory. After all, it’s the place he reckoned he learned the most in, having little respect for his secondary school.

Aren’t we glad Terry had his library to go to? Would we have had any of his books if he’d been stuck with school learning only? (Well, maybe. Apparently some of his teachers became Discworld characters. But still. Libraries rock. Apart from the Stockport librarian who felt Terry was unsuitable for children.)