I never did read The Da Vinci Code, and I’m not likely to do so now, either. Dan Brown – or his publisher? – is planning to dumb it down to YA level. What a relief! Because young readers are so stupid, they couldn’t possibly read as complicated a book as TDVC, copies of which I understand litter second hand bookshops to the extent they can’t sell them.

If Dan Brown wants to do something for the young, but I’d rather he didn’t, to be honest, couldn’t he simply write a YA novel from scratch, like all these other people who feel they should give this ‘easy’ genre a go?

Then, who to dislike the most; J K Rowling or presidential hopeful Donald Trump? I’m with the many people who fervently hope this man will not succeed. But he does have the right to speak, even when what he says is so offensive that we’d prefer for him not to.

I think J K is correct in saying that we must be bigger and fairer and allow those who say bad things to keep saying them. Banning them will not help. Trying to re-educate them would, but might prove hard. It is very tempting to be as bad as, or worse, than those we fear and dislike. Lots of people find it pretty easy to disagree with a wealthy and famous author. The Guardian photos of the two make them look like pals, almost. But that is the newspaper’s fault, not J K’s.

To finish with something much nicer and easier, here is the link to the interview with Meg Rosoff on Swedish television, first broadcast on Sunday night. It’s on several times this week, but for those of us outside Sweden, it is available to watch online. Meg is on first, for 15-20 minutes, and she is on good form as ever. I think we should have programmes like this in Britain. You know, a bit about books and not just baking and dancing. 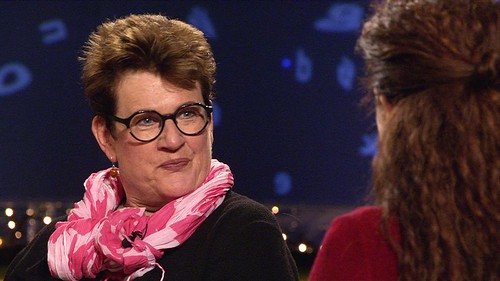 Personally I’d like to know how to tie a scarf like Meg’s. Once you do, you will still look good, no matter what you wear with it. (Or maybe I wouldn’t, under any circumstances.) Meg’s new glasses are divine. Quite Harry Potterish, in a good way.