I believe one of the young people at Yay!YA+ in April told Victoria Gemmell that her debut Follow Me was the best book they’d read. I can understand that. While as a terribly responsible and boring adult, and for that matter, as the sensible teenager I used to be, I want to run screaming the other way, when I read about how teenagers stomp straight into trouble and then go even further in the wrong direction, rather than be cautious. 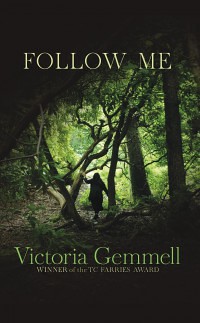 But after feeling scared and also pretty annoyed with Kat in Follow Me, I got to the stage where I couldn’t let go and had to hurry to see who was the bad guy. Because Victoria spreads suspicion all over the place and you’re not totally sure who the evil character is going to turn out to be.

Kat’s twin sister Abby committed suicide, one of several teenagers to take their lives in this small town. And it all seems to have had something to do with a place called the Barn, which Kat hadn’t heard of until she meets Rob, who is one of the ‘founders’ of the Barn.

Handsome and charismatic, Rob seems very suspicious, as does his friend Michael. Whereas Callum who works with Kat is your archetypal heroine’s love interest, and kind and sensible too.

As Kat stumbles round the Barn and the woods, asking questions and falling in love with Rob, you just want to shout that she needs to be careful and to look out! There’s a reason there were so many suicides.

Terribly gripping, even though I really didn’t want to be anywhere near that Barn or the weird types frequenting it. Whatever you do, don’t follow!

This entry was posted in Authors, Books, Reading, Review and tagged Victoria Gemmell. Bookmark the permalink.