This is the kind of novel you simply read and read until you get to the end. L A Weatherly’s Broken Sky (with the subtitle Trust No One, which you should keep in mind at all times) is a futuristic historical sort of WWII story.

It’s 1941 in a new world, one long after our 1941, but with a lot in common with the real WWII period. Our world was destroyed in one too many wars, and now they have Peace. War is not permitted. But to keep some kind of balance, fighter pilots fight one-on-one to determine which country gets what and when. 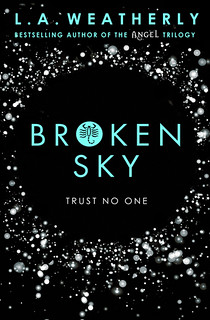 Amity is such a pilot, 18 years old, and based near what used to be Los Angeles. The country next to her Western Seaboard, is Central States and they have a leader who reminds me very much of a certain presidential hopeful. He is just as scary, too, and there is a female character rather like the two-faced woman in a recent Danish television series.

I like the way we now have girl pilots as main characters in books, and how there can be an alternate WWII, allowing the writer to change reality a little, while still keeping much of what we are used to.

Under the surface things are not as neat and clean as people have been led to believe, however. The reader discovers this from the start, as Lee begins with almost the end, and you know how bad it will be. Just not how it got like that.

‘Trust no one’ is what you need to keep in mind. And you think, ‘yes, but…’ and I suspect we shouldn’t do that. Unless there is lots of double and triple bluffing going on. Which there could be. Perhaps.

There is one thing wrong with Broken Sky, and it’s that there are two sequels still to come. I want all of it now!