Neither Tom Palmer nor Barrington Stoke could have known how appropriate it would turn out to be to offer this series of three books about planes and past wars, set in a soccer summer school for young teens, right now. Spitfire is the second book, and as the title tells you, it’s about WWII. 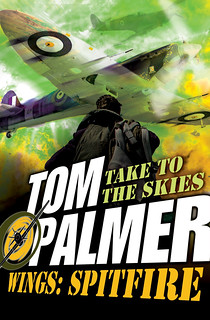 In the first one, Flyboy, we met Jatinder who ended up in WWI, flying a plane, mysteriously taking over the part of a real WWI pilot who, like Jatinder, was a Sikh. In Spitfire we meet his fellow soccer fan Greg, full name Grzegorz Tomaszewski, whose parents are Polish. In the same strange way as Jatinder, one night Greg finds himself at the controls of a real Spitfire, somewhere off the coast of France.

Like Jatinder, he’s somehow turned into a real pilot, and he needs to grow up fast to deal with a dangerous situation.

Tom Palmer has clearly watched The Great Escape a few times, but there are worse films to inspire a bit of plot, and perhaps young readers today, whether dyslexic or not, won’t have seen the film.

This timetravelling into old wars appears to be connected with the boys’ soccer school host, Steve, whose house sits right next to an old airfield, and who enjoys talking to the visiting boys about what things used to be like. So here we have Britain’s pride, the two world wars, and these stories show us pilots from other backgrounds coming to help the British fight a common enemy.

It’s exciting and not a little emotional. The boys from today learn a lot from their visits to the past. And so should we, about all kinds of things.

(Naturally there is a Spitfire to build.)