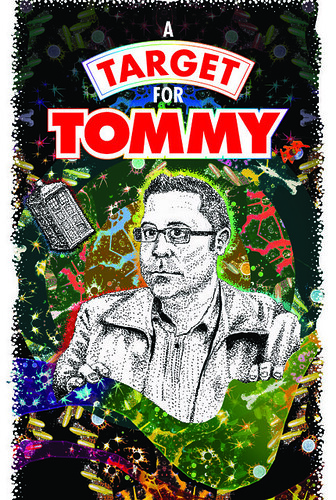 Little-cousin Volvina called in at Bookwitch Towers this week. It was mainly a mistake on her part. Not that she didn’t want to be here, but her reason for travelling went a bit wrong at one stage.

She brought both Double-O and Volvinita as well, not to mention the Queen’s tea towel. The day before they’d done the guided tour on the HMY Britannia, and very satisfied they were too. But they hadn’t had the tea there, and instead bought me a tea towel, under the impression that it’s some grand thing involved in the Royal serving of tea. 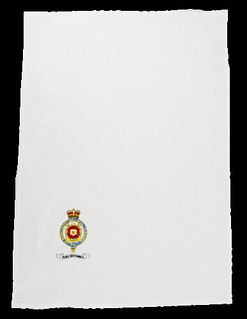 When actually it’s what you dry the dishes with. More useful, if you ask me, as I rarely have elegantly served tea around here, with some uniformed chap wearing a tea towel draped over his arm, or whatever you’re supposed to do with it.

So that’s what they learned from me. They’d not been before, but thanks to online maps they could tell I’d changed my garage doors…

The more telltale proof they’d come to the right house was the oystercatcher in the window. And Gunnar Sträng, Sweden’s former (very former) chancellor of the exchequer. He’s also in a window, although not sharing with the oystercatchers.

I offered them refreshments and they were keen to have tea, seeing as they’d missed out on the Royal variety. I wasn’t sure whether they thought I’d surpass the Queen, or if their expectations had been quite low at the Britannia. In the end I didn’t even manage side plates, and we simply peeled the wrappings off the little cakes from Sainsbury’s, eating them as they came.

But that’s all right. They won’t know how low my standards have sunk.

Would Michelle Magorian be able to scare me witless in a mere 66 pages? Barrington Stoke length pages at that, so not that many words.

The Front Room is about a family of four, on a belated holiday, after the mother has had a miscarriage, where they were lucky to book the flat they’re in. Hannah has to sleep in the front room, and she is sure she can hear someone breathe at night, and she can feel chills down her spine. But her parents don’t want to be disturbed… 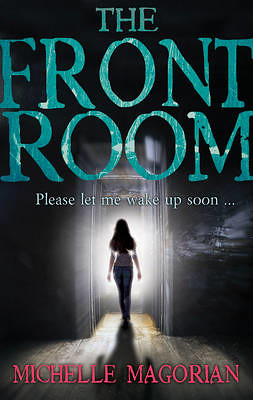 So maybe the place is haunted, but how bad can it be? Just a little breathing and some chills. Just ignore it. If you can.

Hannah can’t, and ever desperate she

Well, I can’t tell you that, of course.

Yesterday Hilary McKay said in a comment here that lovely letters from friends and fans are a problem, from the point of view of hanging on to them. Or getting rid of them, as the case may be. And I agree, apart from the fact that I have no fans. While smaller than books, letters can be harder to store. How do you file them so they can be found again?

Hilary’s books will be found on the shelf with the other M books. But a letter from someone whose name you might not remember later on? Can’t even do the alphabetical filing. (It’s pretty much like all the rubbish I have kept because it might come in handy one day. And when you accidentally come across it ten years later, you neither recall you had it, nor would have known where to look for it.)

Anyway, letters and cards are one thing, and I do hang on to some of the best and prettiest. But emails. Do you keep them?

And by keep, I don’t necessarily mean whether you let them sit in your inbox, or in a mail folder carefully labelled Hilary McKay (sorry to be using you as an example, Hilary), to be unearthed at a later point. I mean print them out and keep them as though they’re letters (which many are, in some way).

I tidied the filing cabinet some time ago. This was long overdue, and I pruned the contents much harder, being quite ruthless. I was somewhat taken aback when I came across a thick wad of authors’ emails on paper. They were from the olden days, when emails were longer and less frequent, and I was less jaded and treasured them immensely. Hence the printing out and keeping.

Well, I don’t do that anymore, I can assure you. I don’t necessarily believe that cyberspace will safeguard correspondence any more than I did then, but I’ll risk it. (Obviously I treasure every last scrap of email from real people.)

Also, I am not keeping the stash of print-outs. They have been shredded. Could have turned into bedding for the hamster, if I had one.

But I do wonder what happens to any future books about a person, where in the past letters have been one of the ways to learn about someone. Michael Faraday wrote so many letters during his lifetime that they fill six volumes of very hefty books. When a biographer comes to write about Hilary McKay, how will they find the material? I’m sure there will be lots of letters, but will any researcher know to ask me to make my inbox available? And should I do so? I mean, you never know what might turn up.

It could be that the story wasn’t even true. I’m the kind of person who believes, or wants to believe, what reliable newspapers report. I’m fairly sure I have mentioned this snippet before, and therefore I am as guilty as anyone of spreading what might not actually be true.

But it stops me from throwing away books. Every time.

It’s the brief tale of a poor young woman somewhere in Africa. Her most treasured possession was a portion of a paperback novel. Not even a whole book. After I’d read about her I wanted to get on the first plane and hand over a suitcase full of books.

What to do with very early proofs? Whether I read them or not, assuming I do the reading nice and soon after receiving them, doesn’t matter. If I don’t feel I can keep them, I can’t pass them on either. I will always honour a publication date.

I recall the pain I felt when seeing loads of – unread and pristine – proofs chucked in the bin in a bookshop. My reaction to those books in what has to be a very wrong place, was to rescue them. But I realised I couldn’t, and shouldn’t.

Maybe proofs are always meant to be thrown away. Pulped. If I keep mine, I suppose it’s all right. Pass them on, though? The opposite of the bookshop bin was Offspring’s school library. There we entered even proofs into the library system. After all, it saved the school the cost of a book, and provided young readers with yet another tempting novel.

I don’t know what’s right. As with so many other situations, I would guess there is a legal right, and then a moral one.

And the young woman in Africa.

It’s not often I laugh out loud when reading picture books. This was one of those rare occasions.

I didn’t read Oi Frog!, but its sequel Oi Dog! is a lot of fun. Words (and what words!) by Kes and Claire Gray, and scene stealing illustrations by Jim Field, tell us what happens after (the frog, I presume). 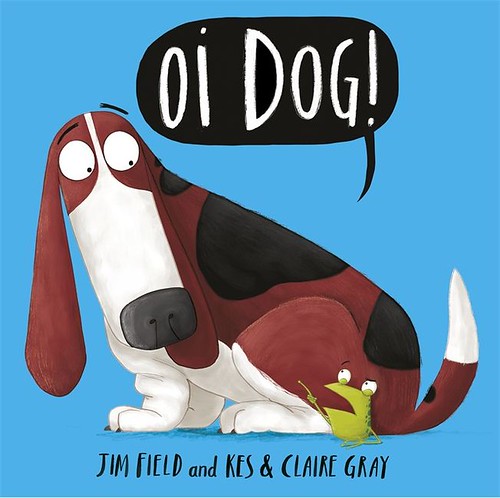 The cat believes the rules as to who sits on what or whom are set, but frog decides to change this. Dogs are to sit on logs. Not on frogs.

And after that there is no end to the rhyming the frog can do. Or, for that matter, how many animals you can come up with and rhyming things they can sit on; puppies on guppies and poodles on noodles.

Great stuff, and I can imagine it would be even more fun if you actually had a child in the room with you when you read. (Well, I did, but he’s pretty old and he was busy opening new bank accounts for me at the time…)

Guess what frogs get to sit on now?

The Sword That Saves

Aikido made me reach for the hoover. There was something in Ambrose Merrell’s The Sword That Saves – which is almost entirely about aikido – about how the very first small step is part of the whole thing. I think this was along the lines that having come to the class, you had already started. It was this I borrowed for my cleaning session, where procrastination was winning. 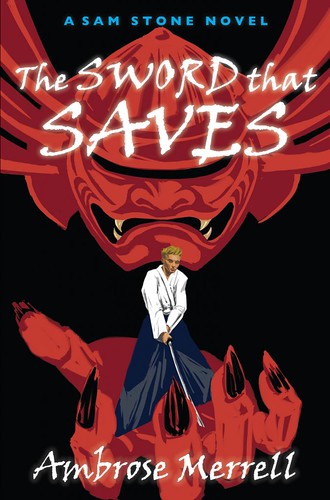 The book is full of these thoughts; how you can be good by learning aikido, and learning to be like the old Japanese martial arts teachers. To be truthful, I am really not interested in martial arts or anything Japanese, but nevertheless gave this book a go. It’s about orphaned siblings Sam and Zoe and Sophie, recently transplanted English children in Vancouver, where after their parents’ deaths they are fostered separately. They desperately want to be together again.

Sam happens to stumble across an old Japanese man, Kensho, who takes an interest in the boy and teaches him aikido. Kensho’s own teacher Hiroshi is 113 years old, and lives in 16th century Japan, necessitating time travel. Soon enough Sam time travels as well, as do his sisters, forced by circumstances.

I didn’t entirely grasp what Sam’s task is, or will be, except to fight the Darkness, with the help of Kensho and Hiroshi, and also the girls’ abilities regarding visions and an affinity with animals.

Ambrose is obviously incredibly enthusiastic about aikido and all that belongs to this way of life, and I agree that much about the rules appeals; the physical fitness and the mental strength, and learning to be fair and kind.

But, I did find the three siblings unbearably good, and even for someone like me who wants to avoid problems, there wasn’t enough conflict (apart from this unknown Darkness). And some more editing wouldn’t have come amiss.

That said, it was fascinating, and I can see that if it sells aikido to young people, this in itself is a good thing. I’m thinking there will be more books about Sam and his sisters, because matters are not yet resolved.