Beck is a beautiful story, with a sad but beautiful background. Written mostly by Mal Peet, but finished by his dear friend Meg Rosoff after Mal’s far too early death in 2015, it is a collaboration between two of the best writers for Young Adults. I’ve heard of other writers who agree with a colleague and friend that if the worst should happen, the friend will finish their book for them. We don’t want this to happen, but if it does, it’s far better for a ‘chosen one’ to take over.

Set primarily in the 1920s, Beck is the result of a brief encounter between a poor Liverpool woman and a black sailor. Mal kills off his whole family in a sentence or two, and then our orphan is truly on his own, before he is shipped off to Canada at 14. Received there by the Catholic Brothers, the modern reader can’t help wondering if they will be good Brothers or wicked ones. 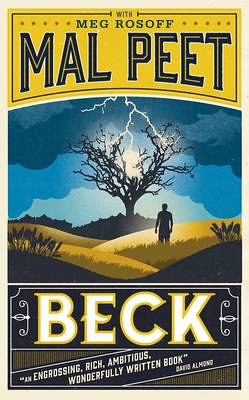 Eventually most of the orphans are sent on to work on farms, and it’s not exactly Green Gables. Beck ends up in one place after another; not all bad, but he definitely doesn’t have an easy life.

This is a wonderful story about a young man battling adversity, and it offers a window on a Canada of almost a hundred years ago. It’s not the Depression, as it says in the blurb, but you can’t help thinking about what will happen to the people you have come to love, when the Depression does arrive.

It’s not easy deciding whether an interrupted book should be continued by another writer, but I often think of Elizabeth Gaskell’s Wives and Daughters, and how I wondered what was meant to happen, and whether I should make up my own [happy] ending, or not. And if I’d get it right.

I’m grateful for the opportunity to read all of Beck.

One response to “Beck”