It was beginning to look like another embarrassing admission from me, that I knew nothing about one of the authors at last night’s event in Charlotte Square. I’d never heard of this M A Griffin* who was appearing with Theresa Breslin, talking about their dark new novels with Daniel Hahn. But I assumed she’d turn out to be absolutely fine. Being heard of by me is no guarantee of anything. 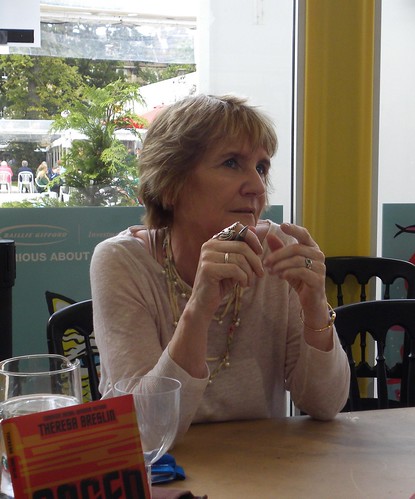 Following a fruitful and pleasant chat with Mr B[reslin] outside the theatre, we went in and sat down, and after a while I looked at the stage and discovered that M A was actually a man. Another 30 seconds and I realised I knew him. It’s just that three years ago he went under the name of Fletcher Moss, like the park in Didsbury. And I vaguely recall that I managed to force his real name out of him at the time, but had half forgotten it again.

So that was nice; knowing all three people on stage quite well. Not that I’d read the books, though. That will be my next task, once I’ve unearthed some copies.

Both Martin’s Lifers and Theresa’s Caged sound terrific. Their covers matched too, as Daniel pointed out in his introduction of ‘two very very nice people.’ Gritty, contemporary page turners is what they are. 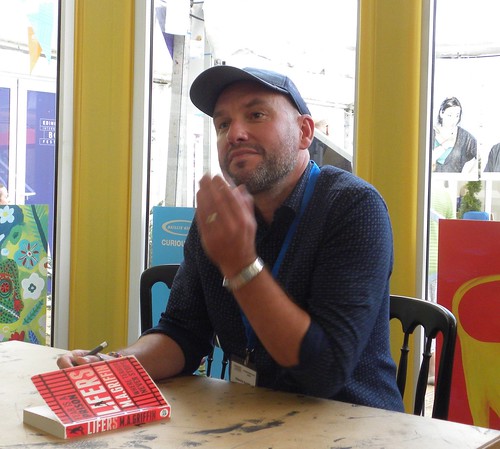 The background inspiration for Martin came when he was failing to teach a class some beautiful poetry, and one of his students happened to mention how she’d like to camp on the grass outside the classroom when she runs away from home. As you do. He also acquired the word ‘screb’ from a pupil. (What Martin will do for supplies in future, now that he’s left teaching, is another question.)

Theresa’s book began with seeing young people sleeping rough in London, and then she mixed that with cage fighting, which she came across elsewhere. While talking inspiration, Theresa mentioned another of her books, Name Games, which she wrote on a train journey after overhearing two girls complaining about their names. Again, as you do.

Apparently Martin has three middles of his book; one in the book and two at home which didn’t make it. His editor is great, and will ask things like ‘is this where you want to go?’ (I suspect the answer to that is always meant to be ‘now that you mention it, probably not.’)

They both read short excerpts from their books, which made them sound even more grittily intriguing. Martin has discovered that unlike in films where a fight scene can take forever, you can’t have eight chapters of fighting in a book. And Theresa asks young readers of the target age to read what she writes, because they won’t hesitate to say they ‘could have written it better’ themselves.

Decisions play an important part in really good stories. Fighting a dragon is not such a big deal, whereas having to chose between something dreadful happening to your best friend or to your girlfriend is quite chilling stuff. Theresa mentioned hearing about homeless people who steal wheelie bins to sleep in, because they are dry and possibly safer than just sleeping outside.

Afterwards it was the usual signing in the bookshop, and I managed to chat some more with the former Mr Moss, and discovered that the young lady at his side was the once much younger Miss Moss whose pushchair played a part in our first meeting. And this time Martin had practised his signature before he needed to use it… 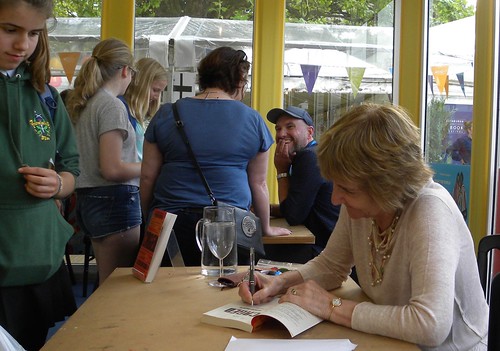 It’s nice when you find out you’re not as ignorant as you thought, and it’s great to meet people again. I tried suggesting that Scotland is a good place to move to, especially if you are no longer using your local park as your nom de plume. However, it seems I might have a long wait for the sequel to The Poison Boy.

*I suppose I could always try this thing called research…