This is a good book. Very good. Just thought I’d mention that.

If you’ve never heard of Malcolm McNeill or his The Beginning Woods, it’s because this is his first book and it was first published in German. I’d say it’s not only the language Malcolm has in common with Cornelia Funke. Here is a worthy successor (at least if he can keep this writing up…), who has written a most enjoyable fairy tale-based book, about a young boy who starts off as a rather unattractive baby. He has teeth, for a start, and he is not cute. Or easy to handle.

The world has gone crazy, with adults simply vanishing all over the place, and no one knows why. The secret lies with the boy, Max, who was found abandoned in a bookshop, and whom no one seems to want. 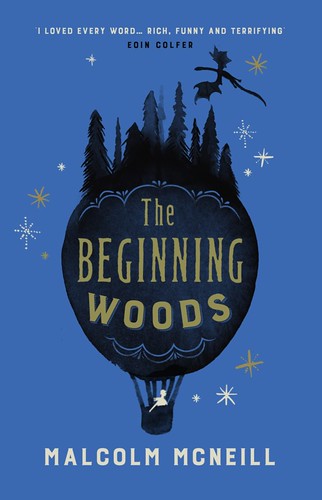 Max dreams of finding his parents and will go to any lengths to be reunited with them. He learns to love reading, which is fine until books and reading are banned. There are a number of situations in this story that bear a remarkable resemblance to life as we now find it, regarding culture and insane leaders and suffering for the greater good; generally someone else’s good.

In his search Max meets some highly unusual people, he travels to strange places, and he falls in love with a dead girl. There are dragons to fight, and wicked witches, and any number of fairy tale creatures in a magical forest. He needs to learn who he really is and what his role is in the vanishings and everything else that happens.

I dont say this enough and that is because there are not enough books to cause me to say it, but this is what a children’s book should be like. While set mostly in London, and partly in France, it has a nicely continental feel to it. I’m not at all surprised it was first snapped up by a German publisher. Luckily for us, it is now available in its original language as well.