I decided to start reading Barbara Henderson’s Fir for Luck just before setting off travelling last week. I was going to see what it was like, and if it seemed promising, I’d continue reading it on my return, because I wasn’t going to add another book to my travel pile.

Well, you can guess what happened, of course. It was really quite promising, and I came to the conclusion that there was ‘plenty of room’ in my handluggage for Barbara’s book, so I could read it on the plane. Before the other planned books. 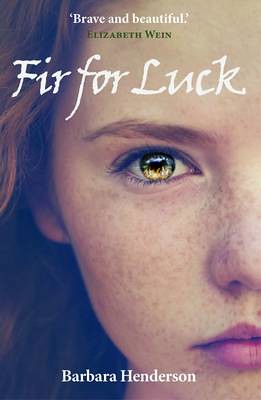 Barbara has based her debut novel on real events from the Highland Clearances, and it is both exciting and terrifying and upsetting. Even when you know roughly what happened then, it still becomes more serious and real when you meet people and see exactly what was done to them. As with most things, you feel more when it’s someone you know.

The main character is 12-year-old Janet, who accidentally ends up the heroine of her village as it’s about to be demolished and everyone in it sent packing, with hardly any notice. What makes it more powerful is the fact that Janet’s grandmother has already had this happen to her once before, when Janet’s father was a little boy.

In the midst of the dreadful threats to Janet’s village, we learn what life there is like, and what sort of people live in it, and what they do for a living. There are grades of importance within the little community, and having a better house doesn’t necessarily save you when the day comes.

You know there can’t be a happily ever after solution, but you wish that some good will come of the fight to stay, which Janet starts.

It’s fascinating, and really so very exciting that you simply can’t go on a trip mid-book and leave it behind.