I’d forgotten how nicely Irish Chris Haughton sounds. I wasn’t surprised that this wonderful picture books author and illustrator had been invited to the Gothenburg book fair. Swedes love their picture books, after all.

But they’d added another aspect to Chris, by calling his event something like Fair Trade Picture Creator, and that is even more of a Swedish thing. So I don’t know if the ladies flocked to his event because they like sweet picture books, or they enjoy beautiful rugs, or they just like nice Irishmen. 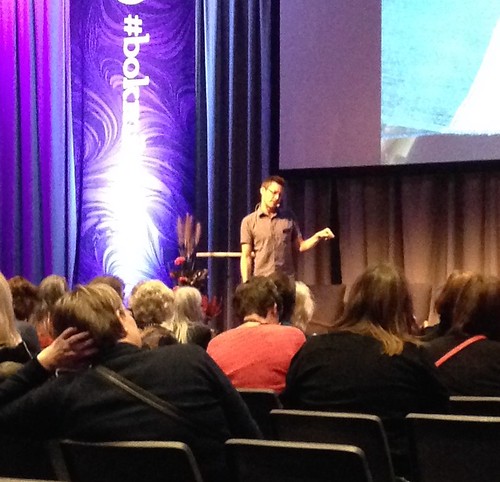 That was the thing when I saw Chris in Edinburgh last year; I didn’t quite get the bit about making rugs. And appearing with Chris Riddell and Oliver Jeffers, maybe there wasn’t room for the rugs. But now I do, and I love them. They even had some at the fair to look at. (I had sort of imagined him at a loom, making rag rugs, when in actual fact Chris makes beautiful designs, which are then tied in the traditional way by professionals in India, and they look marvellous.)

Anyway, Chris started off his event talking about his picture books, with a slide show, and reading selected bits from a couple of books, showing us how he had developed his ideas. The young Chris had gone from being told he could work as a graphic designer, to enjoying making caricatures, and then discovering the use of computers at college.

The next stage was collaborating with The People Tree, designing various goods for them and being paid in t-shirts, which Chris liked. He travelled in India, and saw things he found interesting, and only got on to the rugs by accident when being shown yarn dyeing and felt he had to be polite about it. He quickly worked out where the rug makers were going wrong; making good quality rugs depicting the Manchester United logo. It was this that made him come up with attractive alternatives.

Chris’s next venture was making an app called Hat Monkey. This is for young children to do fun things, like dancing and singing. Great pictures as with all his stuff.

In Shh! We Have a Plan Chris solved his illustration problems by making it as a collage, and showed us a photo of him playing on his kitchen floor, putting the pieces together. He read us his new book Goodnight Everyone (featuring a beautiful sky at night) where basically everyone falls asleep. So many picture books are about falling asleep…

For school visits Chris has put together a shape kit, which allows young children to play with his characteristic shapes and colours, making new pictures every time. 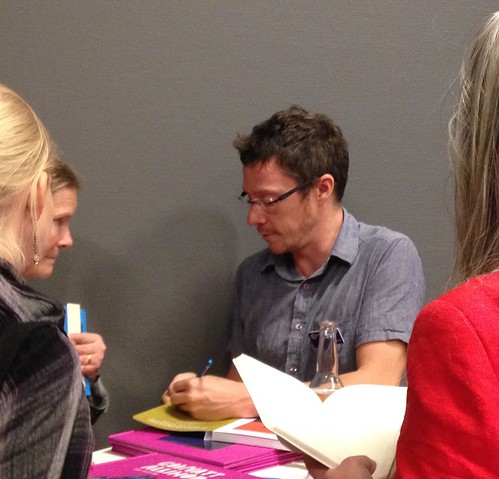 As well as having a display of his rugs and some dolls down on the market stall level, there were books for signing outside. Amazingly all his picture books have been translated into Swedish, and the audience clustered around, eagerly awaiting a doodle or two in each book. I’d have liked to linger, but had another event to run to, so left Chris to ‘his’ ladies.